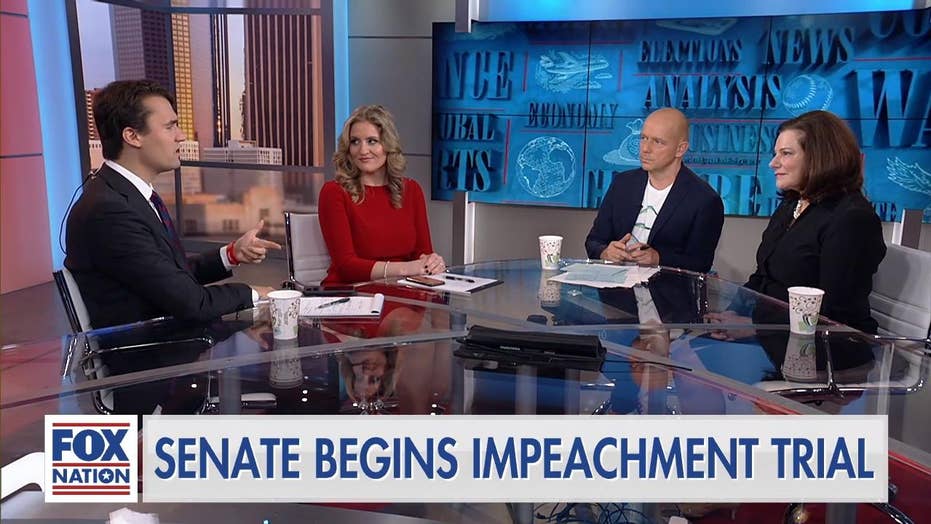 Republicans should take a page out of Jerry Seinfeld's book as the Senate holds the impeachment trial of President Donald Trump, according to Charlie Kirk, founder and executive director of Turning Point USA.

"I'm in the minority of opinion," conceded Kirk on Fox Nation's "Deep Dive" on Sunday.  "If you guys have ever seen the last two episodes of Seinfeld, I think they should call up every single Democrat that has done anything from Al Gore to John Kerry, the whistleblower."

For anyone unfamiliar with the wildly successful sitcom "Seinfeld," in the final two episodes the main characters, Jerry, Elaine, George and Kramer, are put on trial for failing to help a person from being carjacked and thus violating the Good Samaritan Law.

In the courtroom, prosecutors call more than a dozen characters from the show's nine seasons to testify against the defendants.

"I think we should have the full gamut and the airing of all the grievances of the Democrats' sins against our country for the last 30," continued Kirk, referencing "Seinfeld's" fictional holiday of Festivus, a celebration of sorts invented by George's curmudgeonly father.

Harvard Law professor emeritus Alan Dershowitz, a constitutional representative for President Trump in his trial, has called for a quick dismissal of the case, arguing that the charges against the president do not amount to a crime, and are thus, not an impeachable offense.

Also at issue is whether or not the Senate will hear from additional witnesses that were not called during the House's impeachment proceedings.

The Senators will vote on the motion and reportedly White House lawyers are opposed to any new testimony. A simple majority of 51 senators is required to approve a motion to call witnesses, which means four Republicans would have to join the Democrats in voting for the motion.

THE CHART THE TRUMP CAMPAIGN SHOULD BE 'PLASTERING ABSOLUTELY EVERYWHERE': DEIRDRE BOLTON

"I'm half-kidding but in all seriousness: this is an opportunity to make sure this never happens again," said Kirk, arguing that Democrats have been determined to impeach the president regardless of the merits of their case.

"A quick dismissal is tempting, I see that argument," he concluded, "but the way the Democrats are really churning this up... Not so fast as Lee Corso would say... You guys, you have to defend the fact that this has been an intergovernmental collusion against this president from before he was sworn into office."