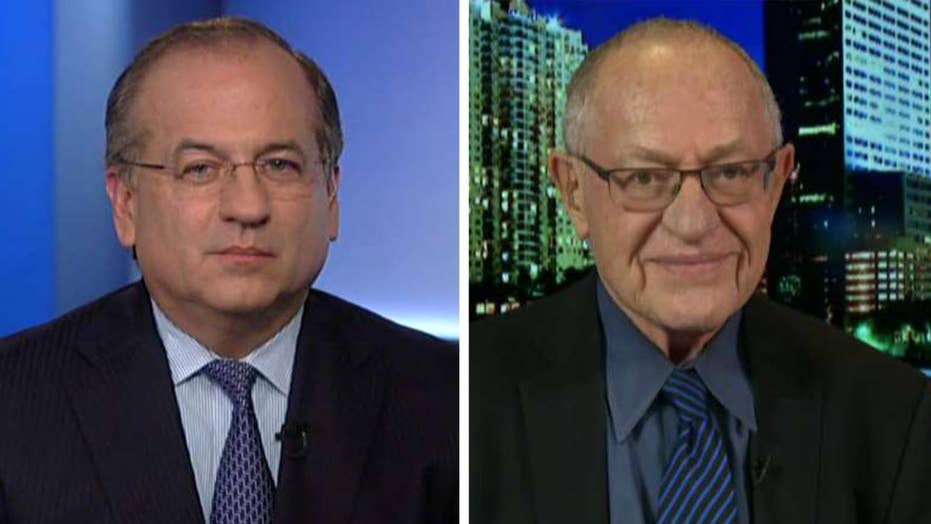 Harvard Law professor emeritus Alan Dershowitz, a constitutional representative for President Trump in his Senate impeachment trial, said that in a normal court of law, the case would be subject to a "motion to dismiss."

Dershowitz said Monday on "The Ingraham Angle" that in a court of law, Trump's attorneys would be wise to petition for a motion to dismiss on the grounds that the charges against him do not amount to a crime, whether or not he acted as he was accused.

“A motion to dismiss, in a perfect world, would be ideal — but does the American public want to see an end to the trial so quickly?” Dershowitz considered.

Dershowitz said that in the case of an impeachment trial, such a motion would become a "political issue."

"This is a motion-to-dismiss case, in which, if it were a criminal case and he was charged with dishonesty ... the first thing you do is make a motion to dismiss because dishonesty isn't a crime," he said, using "dishonesty" as an example not necessarily germane to the current impeachment case.

Dershowitz underlined that he does not believe the president committed either of those acts, adding that the Trump team's legal brief lays out that case.

"The position is he didn't do any of these things, that he is innocent as a matter of fact," Dershowitz said.

"As every criminal trial lawyer knows when you have disputes over facts and disputes over law, you always argue in the alternative. You always argue that the facts are not proved, but hypothetically, even if the facts were to be proved, they wouldn't rise to the level of a crime or in this case an impeachable offense. So, it is not an acknowledgment in any way by anyone on the legal team that the president did anything wrong, that is just not how that brief could possibly be read."

Regarding his title of "constitutional representative" rather than formally a legal team member or lawyer, Dershowitz told Ingraham his role is similar to the capacity in which he served during the O.J. Simpson case.

"My role is to present the constitutional argument -- I am not meeting with the team on strategic issues. I am not involved in whether witnesses should be called, or whether facts should be alleged," he said. "My argument is limited."