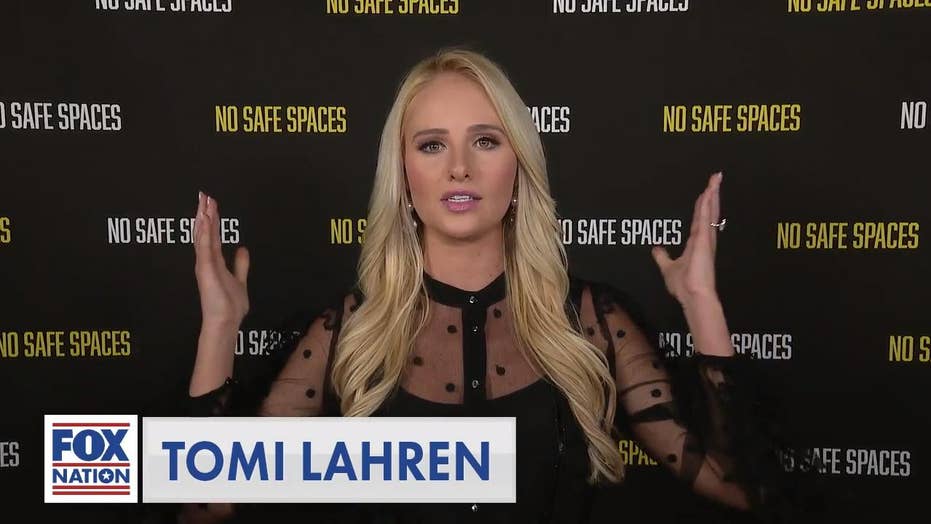 Fox Nation host Tomi Lahren urged liberals and conservatives to unite in support of First Amendment rights during her red carpet appearance at the "No Safe Spaces" movie premiere.

"If you know me, you know that I don't exist in a safe space and I never will. I never want you to either," Lahren said in a special episode of Fox Nation's "Final Thoughts."

The film examines the politically correct world of academia, largely driven by the political left. Featuring conservative radio talk show host Dennis Prager and comedian and podcast host Adam Carolla, viewers are taken on a journey across the country as they explore free speech in America today.

Joined by members on both sides of the aisle, Lahren expressed her support for the film, and said she'd "be a hypocrite" not to attend the Veteran's Day premiere -- despite being unwelcomed in the Hollywood community, she explained.

"Actual conservatives did venture into Hollywood...myself included. Probably not the smartest idea, but that's what we're talking about...not existing in a safe space. So I'd probably be a hypocrite not to come to someplace that's certainly not safe for me and other conservatives," Lahren said.

Preger has called the film a "wake-up call" to the American people, claiming the left is trampling on free speech rights to satisfy an agenda.

While the movie doesn't open nationwide until November 15, "No Safe Spaces" saw a strong opening with the second-highest box office gross ever for a documentary playing on just one screen, according to the movie's producers.

"We need to stop with the cancel culture. We need to stop asking for cry rooms... safe spaces and trigger warnings exist in a time when we have the free speech and the First Amendment and all the things that people and generations of Americans have fought and died for."

According to Lahren, "the point of the movie...is that we need to have open and honest dialog about things that make us uncomfortable. We need to stop with the cancel culture. We need to stop asking for cry rooms -- and safe spaces and trigger warnings exist in a time when we have the free speech and the First Amendment and all the things that people and generations of Americans have fought and died for."

"That's what you have in this country," she added. "Don't so readily and so willfully give those rights away."

Lahren slammed the idea of a "safe space" because it prevents open dialogue between those with opposing viewpoints, she explained.

"Of course, because I am in conservative media, I understand very well that conservatives are often the victim of the shadowbanning, the censorship, the cancel culture, really the safe spaces that people demand often diminish conservatives. And as you know, that's something that conservatives have fought with and they've tangled with for years," she said.

Reiterating the importance of "open and honest" dialogue, Lahren praised conservatives for "standing up for themselves" more than in previous years and said she looks forward to the role they will play in the 2020 election.

"You know, for me, she concluded, "the First Amendment is number one. And in order to protect to defend that right, you need the Second Amendment...please don't exist in one shadow, your echo chamber. Shatter your bubble and shatter your snowflake culture because it's not helping you."