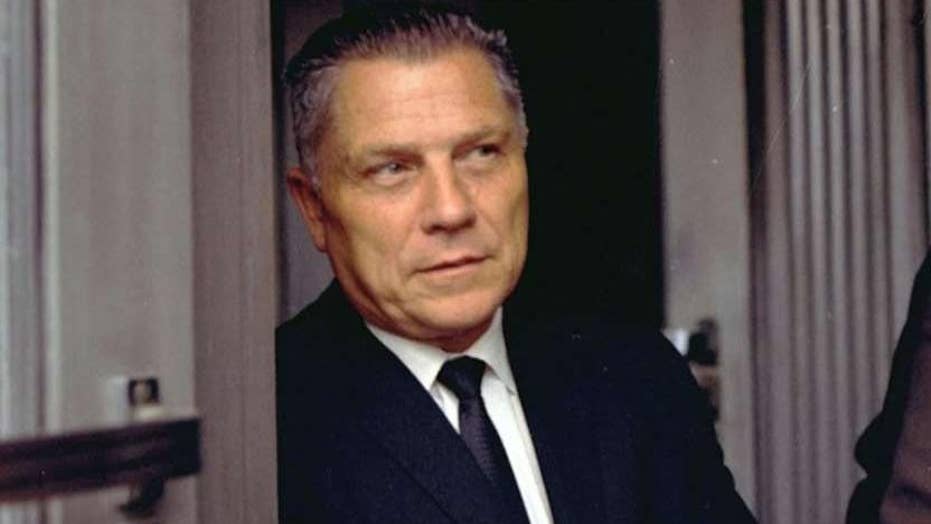 Host of 'Riddle: The Search for James R. Hoffa,' Eric Shawn says the greatest mystery in American history can be unsolved.

"Everyone's talking about [Hoffa] now, because of 'The Irishman'...  but the experts are saying the movie is not true," Fox News senior correspondent Eric Shawn told "Fox and Friends" on Monday.

"The Daily Beast says it's a lie," continued Shawn, "Vanity Fair says the confession is discredited. Slate says that the guy made it up," Shawn told co-host Pete Hegseth.

Hoffa's unsolved murder is one of America's greatest mysteries.

The gangster drama opened to rave reviews when it premiered at the New York Film Festival last month and it will be available on Netflix in late November. But now Fox Nation's new investigation has advanced a different theory of the murder of the infamous Teamster chief.

Shawn argued that the federal government should release more information to either confirm or deny the suspicions.

"What I think is that the president should release the files... the truth is in the FBI files. They should be released," he said.

"The Irishman" is based on the 2004 book "I Heard You Paint Houses," which tells the story of self-described mob hitman, Frank Sheeran, who claimed that he killed Hoffa. Sheeran, who was a Philadelphia truck driver, said that he befriended Hoffa but ultimately betrayed him when he was hired by Hoffa's mafia rivals to kill him.

Shawn met Frank Sheeran in 2001, when Sheeran was shopping around his book proposal. "He told me point-blank that he shot Jimmy Hoffa in the head in [a] house in Detroit," Shawn said in the Fox Nation episode.

In 2004, Shawn led the Fox News team that investigated Sheeran's story. They removed the floorboards of a house in Detroit to reveal human blood, but the Bloomfield, Mich., police determined through DNA analysis that the blood did not belong to the notorious crime boss.

"You got to watch these so-called guys," fired back Natale. "He was a drunk and a Teamster. That's all he was. Every time you saw him he was drunk."

Shawn's new investigation advances the theory that mob hitman Salvatore 'Sally Bugs' Briguglio is Hoffa's real killer. Shawn also claims to have found "at least two of the places where we believe that Hoffa could be [buried]."

In "Riddle: The Search for James R. Hoffa," Phillip Moscato, Jr., son of Hoffa murder suspect Phillip "Brother" Moscato, Sr., said his dad confessed to him on his deathbed.

"Brother" Moscato was a Genovese crime family member and the owner of a dump in Jersey City, N.J. Phillip Jr. told Fox Nation about the moment that his father confided in him, while they sat on a hospital room bed.

"My mother goes and leaves and he said, 'I have a few things I want to talk to you about.' And I'm thinking 'Take care of your mother,' you know, I am going to hear all that... and then he drops a bombshell," said Moscato.