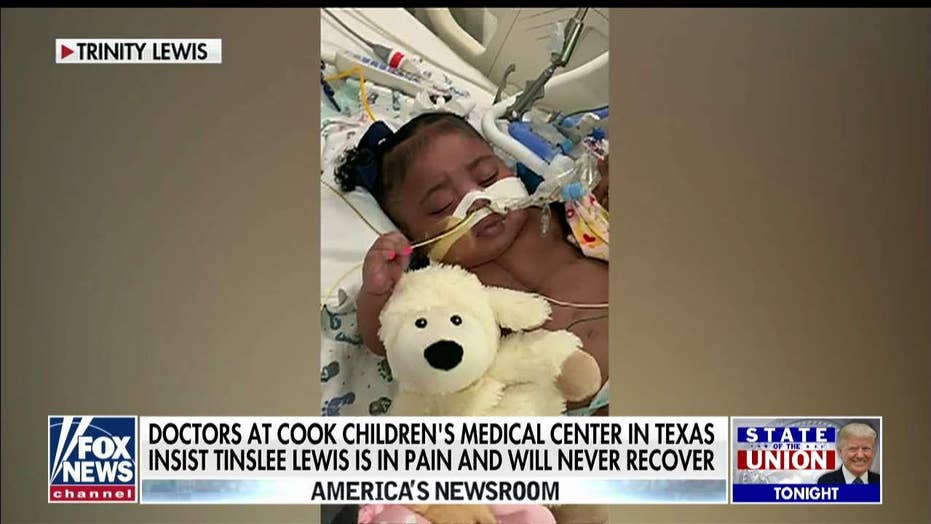 A Texas court of appeals will hear the case to keep 11-month-old Tinslee Lewis on life support Tuesday. No decision is expected today.

After a months-long battle, the Texas Court of Appeals is expected to hear the heartwrenching case of 11-month-old Tinslee Lewis on Tuesday, Fox News correspondent Casey Stegall reported on "America's Newsroom".

Stegall said that while the Second Court of Appeals judge will hear both from the medical staff at Cook Children’s Medical Center and the family of Tinslee Lewis, a decision is not expected immediately.

Tinslee's case has garnered the attention of the Lone Star state’s Republican Gov. Greg Abbott and Attorney General Ken Paxton. Paxton’s office issued a statement earlier this month pledging to “ensure that she will not be deprived of her right to live.”

The Fort Worth, Texas child has been on life support since her birth almost a year ago and doctors say she is in pain and “will never improve.” Tinslee turns 1 on Saturday.

The Cook Children's Medical Center argues that their patient, who was born with Ebstein’s anomaly that is an abnormality in the tricuspid valve that separates the right atrium from the right ventricle, is suffering and her condition is “irreversible.”

Additionally, at the center of the case is a Texas state law called the 10-Day Rule which Stegall said gives medical providers the right to withdraw life-sustaining treatment if the hospital ethics committee agrees with the physician's recommendation.

Cooks Medical Center reported that they did try to get Tinslee transferred, but at least 20 other facilities would not take her. Tinslee’s doctors informed her family back on Oct. 31 that they planned to remove her from life support under the 10-Day Rule.

Wini King, assistant vice president of public relations at Cook Children’s Medical Center, said in a mid-January news conference that while they care for Tinslee too, they "don’t want to do things that are causing her pain for no good end."

In addition to her heart condition, Tinslee has chronic lung disease and suffers from severe chronic high blood pressure. She was placed on a ventilator in July after going into respiratory arrest, and her doctors said that while she appears alert and moving, the movements are the result of her being weaned off paralyzing drugs used to keep her from pulling out the lines connected to the ventilator.

However, Tinslee's mother claims that her daughter is not as grave as the hospital suggests.

"My biggest priority is getting Tinslee appropriate care so I can make the best decision for my baby. This situation takes away my job as a mother and lets other people who don't even know her decide whether her life is worth living," Trinity Lewis told reporters.