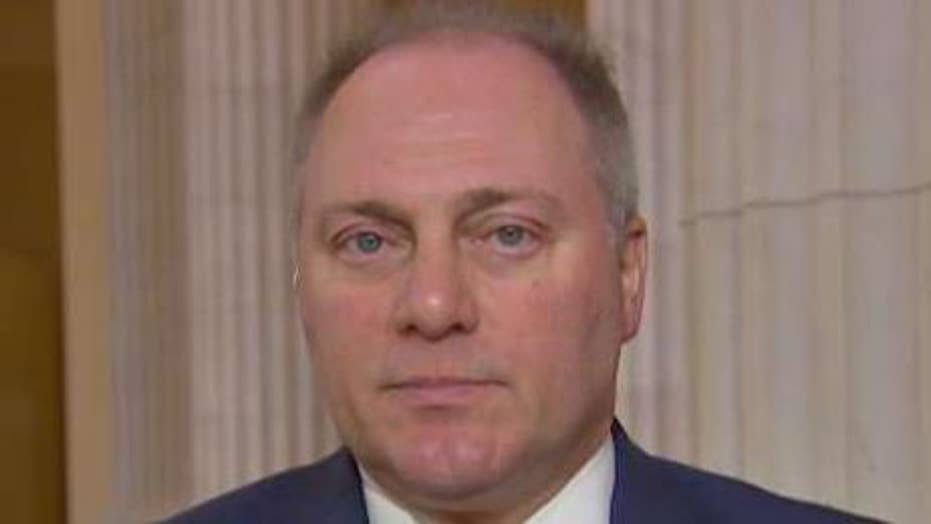 “I think that Speaker Pelosi’s strategy is to try to hide in secret a lot of the information, drip out things that are selective for them in many cases that turn out to be inaccurate,” Scalise told “America’s Newsroom.”

Scalise’s comments came after Pelosi, Senate Minority Leader Chuck Schumer and House Majority Leader Steny Hoyer walked out of a meeting with President Trump on Syria policy, after he apparently called Pelosi either a "third-rate politician."

“It was a constructive meeting after Pelosi stormed out,” Scalise said.

GOP TRUMP CHALLENGER BILL WELD ON DEMS' IMPEACHMENT PUSH: 'I THINK IT'S TIME' TO GO AHEAD WITH INQUIRY

Host Bill Hemmer asked Scalise about the state of Trump and Pelosi’s relationship.

Scalise responded, “It's not good,” and added that Pelosi is trying to impeach Trump without evidence.

Scalise went on to accuse House Democrats of using impeachment, rather than the 2020 election, to get Trump out of office.

"That's not why we have impeachment. ... It’s high crimes and misdemeanors, that’s the standard. They haven’t shown those high crimes but they want to impeach him anyway behind closed doors,” Scalise said.

Trump mocked Pelosi after the meeting, tweeting a photo of her in what he called an "unhinged meltdown." For her part, Pelosi liked the optics of the moment, proudly displaying the picture on her Twitter profile.

Trump has come under fire from House Democrats over his July 25 call with Ukrainian President Volodymyr Zelensky, in which he urged Zelensky to investigate former Vice President Joe Biden's son Hunter's business dealings in the country. Democrats have accused Trump of attempting to set up a quid pro quo using military aid to Ukraine as leverage, though Trump has denied the accusation.

Fox News’ Paul Steinhauser and Gregg Re contributed to this report.