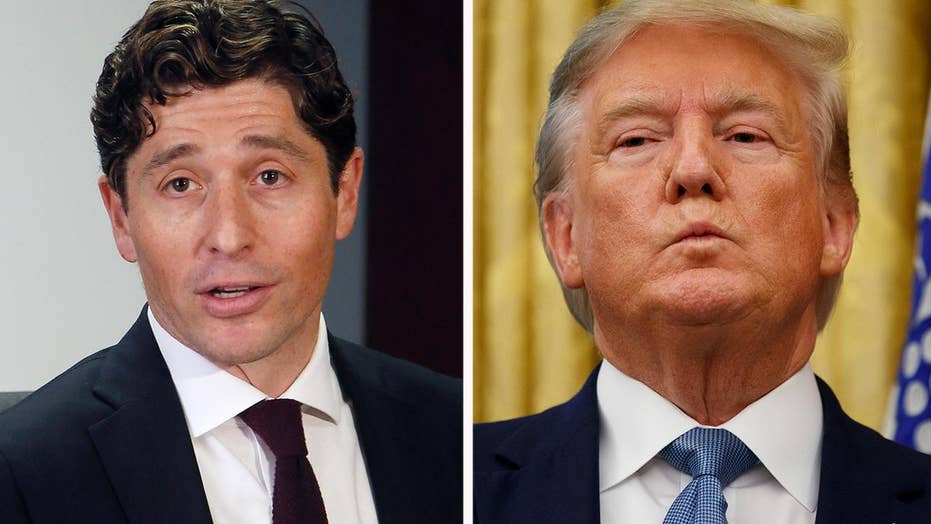 Standoff between Trump, Minneapolis mayor deepens ahead of campaign rally

Former White House press secretary Sean Spicer says the price increase from $20,000 when Obama campaigned to $500,000 for the Trump campaign makes it obvious that they are trying to keep the president’s message out of the state.

Appearing on "America's Newsroom" with host Bill Hemmer, Spicer said that the exorbitant $530,000 security price tag officials intended to impose upon the campaign was "clearly politically motivated" because "they know that Minneapolis is in play" for 2020.

"The campaign's made it clear that it wants to target Minnesota this time. And so, to say that somehow a venue that Barack Obama paid $20,000 for is now escalating to $500,000-plus really tells you everything you need to know about what the motivation is here," he told Hemmer on Wednesday.

The Trump campaign announced on Twitter that, after threats of a legal battle, the Target Center was no longer a point of contention: "The arena in Minneapolis is fully approved...President Trump's Keep America Great rally will go on as scheduled," campaign manager Brad Parscale wrote to supporters.

Security costs for former President Barack Obama's health care rally at the Target Center in 2009 hovered at around $20,000, according to police estimates.

Spicer noted that while it's possible to inflate the cost over time, "$500,000 is pretty out of proportion for what inflation has been over those years."

In a news conference on Tuesday, Frey said that "it's not extortion to expect someone to pay their bills."

"We will show with bracing clarity that Minneapolis is a world-class city and we will not take the bait. We've all seen the rhetoric that is pushed out at these Trump campaign rallies. It is hateful. It is divisive, and we do not welcome that kind of rhetoric here in Minneapolis," he told reporters.

The president took to Twitter later in the day to complain that "Presidents Clinton and Obama paid almost nothing!" and that "Radical Left Dem Mayor of Minneapolis Jacob Frey" is "doing everything possible to stifle Free Speech despite a record sell-out crowd at the Target Center."

He also tweeted in favor of dumping both Frey and Democratic Congresswoman and "Squad"-member Ilhan Omar.

"Minnesota is a great state and great people and the idea that the mayor is trying to silence the president's campaign from going in there and bring his message really speaks to how scared I think the Democrats are that the president could pick up those 10 electoral votes," Spicer declared.