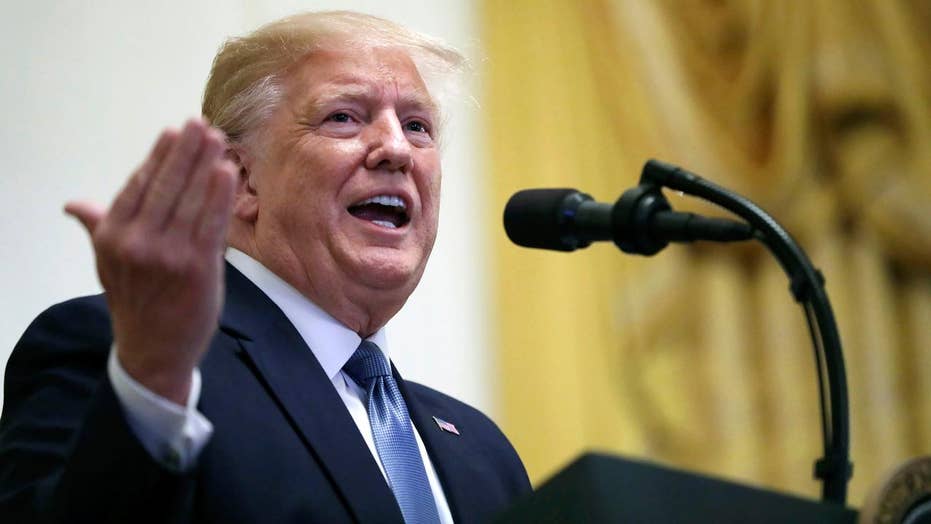 President Trump called Tuesday for Minneapolis voters to “dump” Mayor Jacob Frey – as well as Rep. Ilhan Omar, D-Minn. – amid an escalating battle over a rally Trump plans to hold at the city’s Target Center arena this Thursday.

Trump’s campaign has threatened to sue AEG, the company that manages the arena, after Minneapolis city officials charged a stunning $530,000 for rally security, which the Target Center said the campaign must pay if they still want to use the venue.

Trump signaled Tuesday morning he still plans to show up, tweeting:  "Someone please tell the Radical Left Mayor of Minneapolis that he can’t price out Free Speech. Probably illegal! I stand strongly & proudly with the great Police Officers and Law Enforcement of Minneapolis and the Great State of Minnesota! See you Thursday Night!"

The reference to police may have to do with a recent ban against officers wearing their uniforms while supporting candidates at events or in advertisements. Lt. Bob Kroll, head of the police union, told Fox News that he found out about the ban soon after Trump announced the rally. Kroll told Fox News that "Cops for Trump" shirts that were made up in response are selling out. Proceeds for the shirts are going to police union charities.

In the past, Frey has spoken out against the president, calling his actions “reprehensible” and saying that Trump’s “message of hatred will never be welcome in Minneapolis," the Minneapolis Star-Tribune reported.

Trump campaign manager Brad Parscale said in a statement that Frey was demonstrating “an outrageous abuse of power” and that he was “trying to deny the rights of his own city’s residents just because he hates the president.”

The campaign said they will take legal action if AEG does not honor their contract by late Tuesday morning.

“We are well aware of Mayor Frey’s vocal partisan opposition to President Trump and calls to disrupt the rally,” read a letter from Trump law firm Jones Day to AEG. “This last-minute squeeze seems to be nothing but a pretextual political effort with serious First Amendment ramifications.”

Neither AEG nor Frey’s office immediately responded to Fox News’ requests for comment.

A campaign statement also pointed out that when then-President Barack Obama held a rally at the Target Center in 2009, police estimated that costs amounted to approximately $20,000.