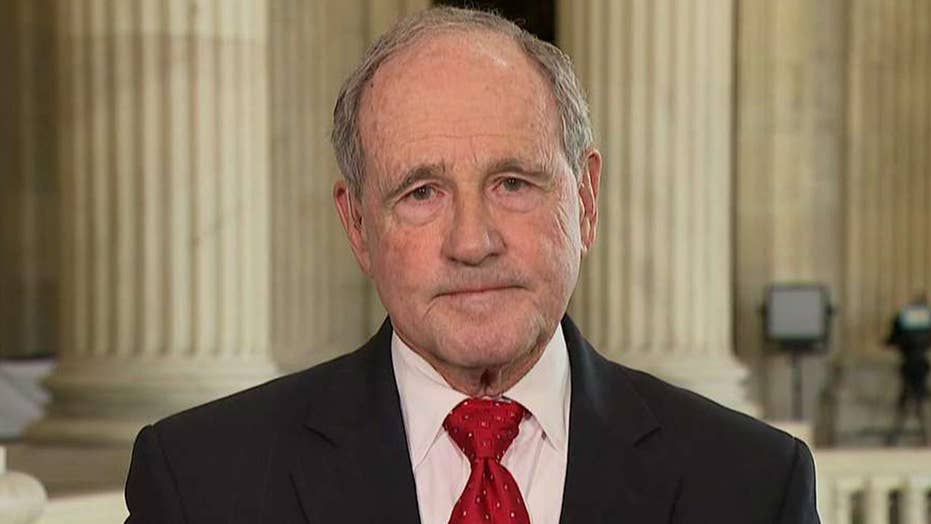 Sen. Risch on missile strike: Had Iran taken lives in that attack we’d be in a very different place right now

Risch told "America's Newsroom" that Wednesday's controversial 75-minute-long briefing was led by five of the "best people the administration has."

"It was good. It was in-depth. It was clear. I fully understand that there's a partisan divide on this and, of course, that we have two or three [people] on our side [who came out of] it also disagree[ing]...But, for different reasons," he stated.

Sen. Mike Lee, R-Utah, was one of those GOP members who were upset, telling reporters that it was the "worst military briefing" he had ever seen. Lee notably claimed that one administration official had warned lawmakers during the "lame" and "insane" meeting that Congress shouldn't debate whether additional military action against Iran would be appropriate.

"The president has three things available to him: he's got his inherent Article II constitutional authorities, he has the War Powers Act, and he has the 2002 declaration of the use of power in Iraq, which this specifically covered," Risch told hosts Bill Hemmer and Sandra Smith.

"Mike [Lee] feels strongly that the point at which the president can use power should be handled differently," he said, noting that the Utah senator was "specifically" frustrated no one would give him a definition of when the U.S. is at war and when the U.S. is going to war.

"That is, unfortunately, it isn't a bright line," Risch added.

"I think that the question that Mike Lee is arguing is at what point can the president do this? And, that's again an oversimplification. But, it is a complex question and one that deserves debate," he stated.

The House of Representatives is set to vote Thursday on a non-binding War Powers resolution that aims to limit the president's ability to take military action against Iran. The Democrat-authored resolution would amount to a rebuke the administration's decision to launch a drone strike that killed Iran Gen. Qassem Soleimani.

Risch said that while he "really hopes we're in a time of de-escalation," Iran "knew what the red line was" and had been escalating [tensions] for the last year."

He added that Trump's actions were taken "intentionally to restore deterrence against Iran because they've been pushing the envelope."

"Had they taken American lives in that attack [Tuesday night], we'd be in a very different place than we are right now and Heaven help us all," Risch concluded.