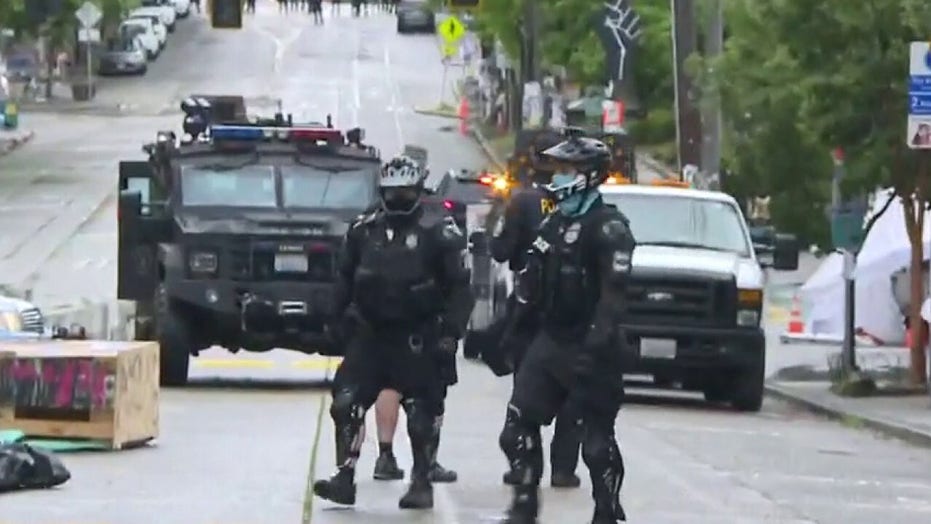 As protesters and armed anarchists seized control last month of a swath of Seattle's downtown that includes a police station, dubbing it Capitol Hill Organized Protest, the local and mainstream media largely echoed elected leaders by insisting it was a peaceful protest – until people started getting killed.

The spin by the Seattle Times and national outlets that covered it belied the violent and dangerous origin of the area that began on June 8, when Seattle police abandoned their own station and allowed self-described anarchists to create a "police-free" zone. On Wednesday, police went back in and finished clearing out the area, after multiple shootings, an alleged rape and at least two murders.

“CHOP violently seized six blocks of downtown Seattle, guarded the area they stole with semi-automatic rifles and appointed a leader who called himself a warlord and the media spun it as a fun time with ‘free snacks,’” Washington Times columnist Tim Young told Fox News.

“That's as insane as saying Boko Haram was just trying to start a dating service when they kidnapped nearly 300 women in Nigeria a few years ago,” Young added. “And those liberal outlets probably still can't figure out why people call them fake news.”

Since it was established, there have been at least four shootings, two of which left a 19-year-old and a 16-year-old dead in separate incidents. Seattle police made more than a dozen arrests after Mayor Jenny Durkan declared the gathering an unlawful assembly – a far cry from how it was originally portrayed by the media and by Durkan herself.

The mayor responded to criticism of her leadership by President Trump by tweeting that he should not be "so afraid of democracy."

The Seattle Times was perhaps the most egregious when it came to celebrating the cop-free area. The paper boasted about free snacks and pleasant smells inside the zone, called CHAZ at the time, on June 10.

“Free snacks at the No-Cop Co-op. Free gas masks from some guy’s sedan. Free speech at the speaker’s circle, where anyone could say their piece. A free documentary movie – Ava DuVernay’s “13th” – showing after dark,” Seattle Times reporter Evan Bush wrote. “Perhaps most important to demonstrators, the neighborhood core was free of uniformed police.”

The Seattle Times even reported on the delightful odor the “calm and peaceful crowd” were providing residents.

“The streets smelled like the Fourth of July, as people seared hot dogs on curbside grills,” Bush wrote. 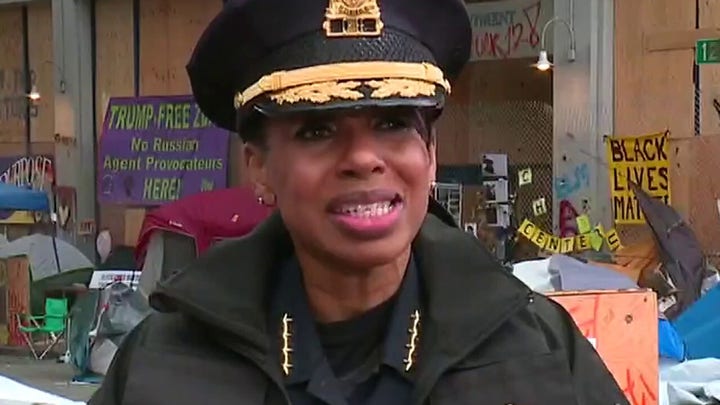 The following day, the Seattle Times focused on poets and artists performing inside the area, noting that despite the “festival-like atmosphere” gatherers are often reminded they’re protesting, not partying.

By June 13, Seattle Times business reporter Paul Roberts praised the “community garden” and ways the demonstrators could “advance the goals” of the city’s "newest tourist attraction."

“Dozens of people with rakes and wheelbarrows spread topsoil and chicken manure in newly planted gardens,” Roberts wrote. “Others gathered in small groups to discuss plans for no-till farming and fundraising for medical supplies.”

“It's obvious to media consumers that journalists put protesters above property. It remains to be seen how they would greet an occupation of the Seattle Times. It probably depends on which political agenda you're pushing,” NewsBusters executive editor Tim Graham told Fox News.

“It's also obvious that to cover something when you can glorify it as a ‘street festival’ and then stop covering it when people die, underlines why people dislike the fakery of liberal ‘news’ reporting,” Graham added, pointing to three recent NewsBusters studies as evidence.

While the Seattle Times celebrated CHOP on a local level, other mainstream news outlets raised eyebrows on a larger stage.

NewsBusters reported on June 22 that CBS’ “Evening News” and “NBC Nightly News” both skipped coverage of a deadly shooting inside CHOP. Another study, conducted on June 23, indicated that evening newscasts on ABC, CBS and NBC all ignored another shooting in the area.

“The networks had been actively trying to protect the encampment’s radicals from criticism. First, they turned a blind eye altogether, and when they had no choice but to cover the 'Capitol Hill Autonomous Zone,' as it was called at the time, they downplayed the craziness and provided cover,” Media Research Center news analyst Nicholas Fondacaro wrote after studying coverage of CHOP on ABC, NBC and CBS’ newscasts.

“When the shooting and killing started, they tried to cover it up. They refused to report on the black teen who was shot and killed in the zone last Saturday. And there was no mention of the Sunday or Tuesday shooting at any point during the week,” Fondacaro wrote. ”It was those shootings that were the impetus for the businesses and residents to band together and sue the city for not protecting their rights and property.”

University of North Carolina professor Lois A. Boynton is a fellow in the University’s Parr Center for Ethics. She feels coverage of CHOP “points to some of the basic challenges journalists, all media outlets, face when reporting on contentious and polarizing issues.”

Boynton explained that biases can come from many things, including story angle, what gets emphasized and what doesn’t, who reporters select as sources and a reporter’s choice of words.

“Reporters, editors and producers need to be cognizant of how readers and viewers are interpreting their stories and what impact that may have on the community’s well-being and news outlet’s professional reputation,” Boynton told Fox News.

When Durkan announced last week that officials would end the police-free zone – CNN and MSNBC didn’t feel it was particularly newsworthy.

News broke during the 7 p.m. ET hour on Monday that Seattle’s mayor said the violence was distracting from changes sought by thousands of protesters seeking to address racial inequity and police brutality – but CNN’s 7 p.m. program, “Erin Burnett Outfront” did not mention the news as it unfolded.

CNN continued to ignore the news during its primetime programming, as there was no coverage on back-to-back editions of “Anderson Cooper 360” from 8-10 p.m. ET or during Don Lemon’s “CNN Tonight,” which aired from 10-midnight ET.

MSNBC completely ignored CHOP altogether from 7-midnight ET on the day of Durkan's announcement as “MSNBC Live,” “All in with Chris Hayes,” The Rachel Maddow Show,” “The Last Word with Lawrence O’Donnell and “The 11th Hour with Brian Williams” all declined to report the news of Seattle’s CHOP possibly drawing to a close.

“Most mainstream media outlets have bent over backward to portray the civil unrest as peaceful actions supporting the general aims of justice. That narrative gets largely disrupted if those news organizations now focus on the chaos in places like Seattle,” DePauw University professor and media critic Jeffrey McCall told Fox News at the time.

The mainstream media narrative has extended to other stories, like St. Louis. CNN’s Chris Cuomo was accused of siding with the "mob" on Tuesday night during a contentious interview with Mark McCloskey, the man who went viral for brandishing a gun alongside his wife as the couple protected their home from protesters.

An attorney for McCloskey insisted the couple only retrieved their weapons after they observed multiple people in the crowd who were armed.