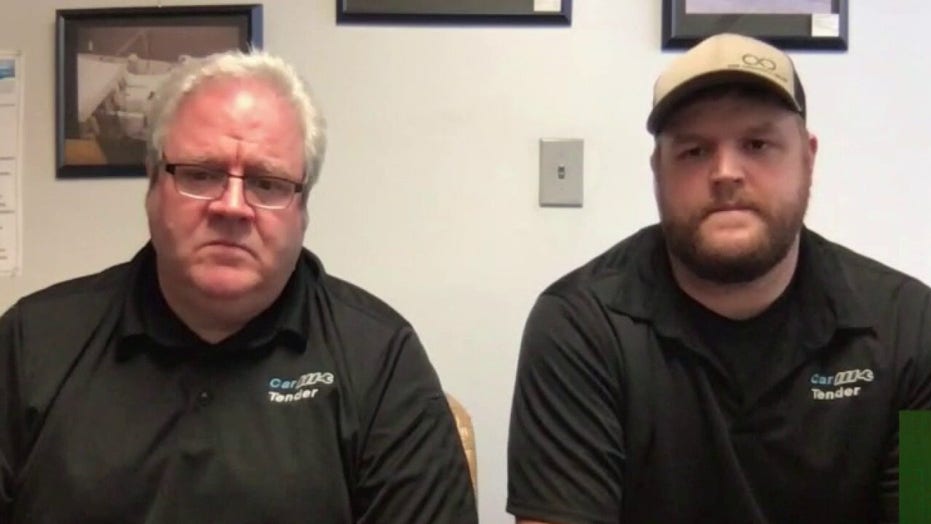 John and Mason McDermott own an auto shop near protest zone and speak out.

Seattle auto repair shop owners John and Mason McDermott told "Bill Hemmer Reports" Thursday that police were told not to respond to their business -- despite more than a dozen 911 calls -- after a denizen of the Capitol Hill Organized Protest, or CHOP, broke in and started a fire.

"I come to find out after a couple of calls that there was a directive from the mayor's office and city council to effectively, [say that] they're not able to come and engage unless there was mass casualty," John explained. "To be honest, I don't understand the thought process behind that."

The father and son are co-owners of the Car Tender auto repair, which sits just outside the perimeter separating the protest zone from the rest of Seattle's Capitol Hill neighborhood.

John told Fox News that they were alerted when someone smashed a window and entered the auto shop Sunday night.

But despite calling 911 around 19 times, they claim neither police nor fire personnel ever arrived at the scene, which grew violent when protesters pushed down their fence and rushed the lot.

Mason McDermott pinned down the suspect as his father repeatedly called 911. John told Hemmer the operator “alluded they were sending someone,” but “finally said they weren’t going to send somebody.”

The suspect reportedly stole cash and car keys. The McDermotts said “mayhem” ensued as protesters gathered outside their business demanding they release the man, whom they eventually let go.

Mason told Bill Hemmer that he has been sleeping in the shop since the incident to protect the family business, but that he fears for his safety during the night.

"All we can do is ask our elected officials [to] do what they're put up to do and we hope that they can allow our police to show up when we call," he said.

"I'm very disappointed in the job they're doing," his father added. "It's really unfortunate that it's not just my shop that is at risk. It's the residents that live here ... and they're just not, we're not, safe. They don't show up.

"It's distressing to say the least."