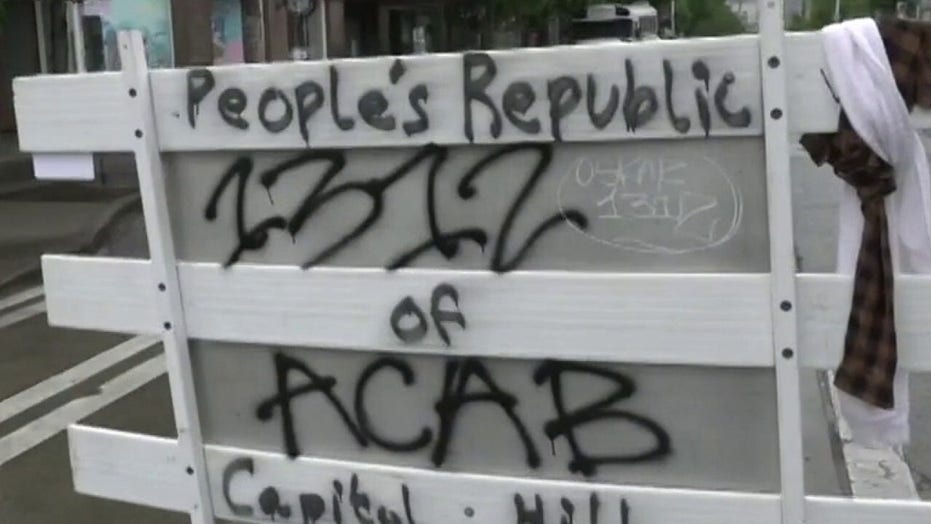 Networks downplay and even cheer on Seattle's cop-free 'autonomous zone'

Is it CHAZ or CHOP?

In the six blocks seized by Seattle protesters, there was plenty of confusion this weekend as some seek to change the name of the self-proclaimed Capitol Hill Autonomous Zone to Capitol Hill Organized (or Occupied) Protest.

“This is not an autonomous zone. We are not trying to secede from the United States,” one protester, Maurice Cola, said Saturday afternoon in a video interview circulating on Twitter.

A group of people entered the perimeter Saturday carrying large American flags. A melee broke out and some protesters occupying the zone tried to rip the flags from their hands.

It was not clear what group those carrying the flags were affiliated with, but some in the crowd accused them of being white supremacists or members of the Proud Boys, a far-right group.

On Friday, one video showed a protester – clad in a blue helmet and covering his face – climbing up to attempt to remove a sign that read “Welcome to the Capitol Hill Autonomous Zone,” which hung over Pine Street.

The video, posted by journalist Julio Rosas, showed the crowd below him shouting and arguing before the man eventually came down, leaving the sign intact.

“It appears the CHAZ street sign is staying for now as the man climbed off the ladder and a struggle broke out over control of the ladder. A woman asks, “Is anyone in charge?” Rosas tweeted.

Seattle police have asked the public for help identifying an arson suspect seen on video early Friday morning pouring liquid onto the exterior of the abandoned East Police Precinct before setting it on fire. People nearby can be heard shouting for water.  They rushed to put out the flames before it spread to the rest of the building or nearby tents.

Seattle Mayor Jenny Durkan visited the CHAZ/CHOP on Friday to meet Marcus Henderson, "the person behind the new community garden popping up in Cal Anderson Park."

“The march may be silent, but the message is loud and clear: #blacklivesmatter,” she wrote.

That same day, Trump tweeted: “Seattle Mayor says, about the anarchists takeover of her city, 'it is a Summer of Love'. These Liberal Dems don’t have a clue. The terrorists burn and pillage our cities, and they think it is just wonderful, even the death. Must end this Seattle takeover now!”

In what has been editorialized as a strained press conference Friday, the mayor and Police Chief Carmen Best attempted to put on a united front. But on Thursday, Best said the choice to abandon the East Precinct, which falls in the CHAZ/CHOP area, “was not my decision.”

“You fought for days to protect it,” Best said in a video address to Seattle police officers posted on YouTube Thursday. “I asked you to stand on that line. Day in and day out, to be pelted with projectiles, to be screamed at, threatened, and in some cases hurt. Then to have a change of course nearly two weeks in, it seems like an insult to you and our community.”

“Although it might not seem true at this moment, your community cares about you,” Best said.

“Ultimately, the city had other plans for the building and relented to severe public pressure. I’m angry about how this all came about,” she continued. “We had solid information to believe that anti-government groups would destroy the precinct once we left through vandalism or arson.”

Best said the Seattle Fire Department was there to protect the precinct and the entire block from a real risk of a major fire.