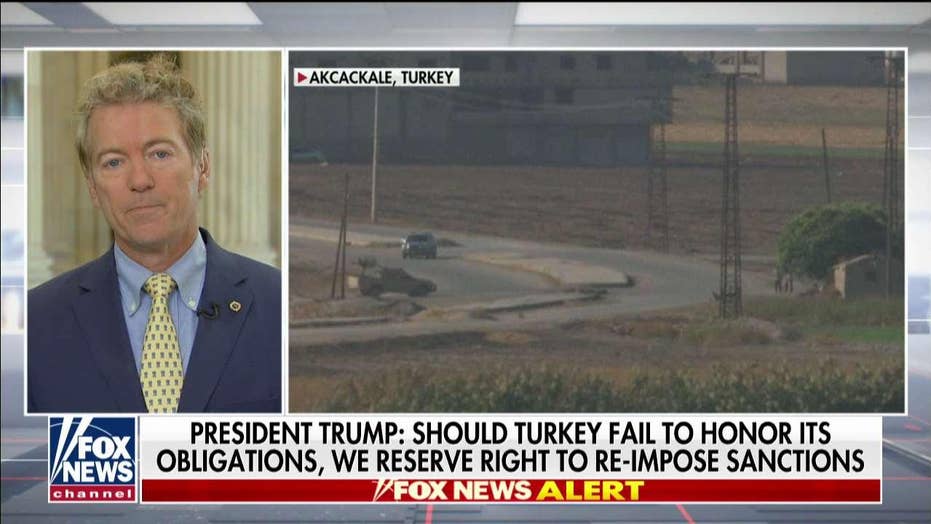 Speaking at the White House, the president said that the conditions had been met by both sides and that the U.S. is lifting sanctions on Ankara that were implemented following the invasion of northern Syria.

"I do believe it will be permanent," he said. "This was an outcome created by us, the United States, and nobody else...we've done something very, very special."

Trump added that if Turkey breaches the cease-fire, the sanctions could be reimposed.

Appearing on "America's Newsroom" with host Bill Hemmer, Paul said it was "amazing" that "we actually have a realignment in Turkey, in Syria, that may actually lead to peace for the first time in eight years."

He also hammered against Senate Majority Leader Mitch McConnell's resolution -- introduced on Tuesday -- in opposition to the president's withdrawal from Syria.

"This is exactly why we must defeat the McConnell resolution," Paul told Hemmer. "The McConnell resolution says that we would disallow President Trump from meeting with [Turkish leader Tayyip Recep] Erdoğan. I think we need to see the world as it is. And, I think it's important that the president meets with Erdoğan."

"His conversations, so far, I think are leading towards peace," he noted, admitting that trust "has to be verified."

Paul said that he believes it's important that the United States does not "slap sanctions on Turkey that never go away" and that he thinks the Kurds "have had many, many, lives saved here by the president's action."

"I think there's also the possibility for the Kurds to negotiate a semi-autonomous region where they would share in oil receipts with the Assad government," he stated. "But, it means that [Syrian President Bashar] Assad has to be part of the equation."

"This is a war that was started with President Obama getting involved in a senseless way in the Middle East again," Paul concluded. "But now, it looks like we may actually see a realignment and a possible peace plan that will come about because of President Trump's decisive action."