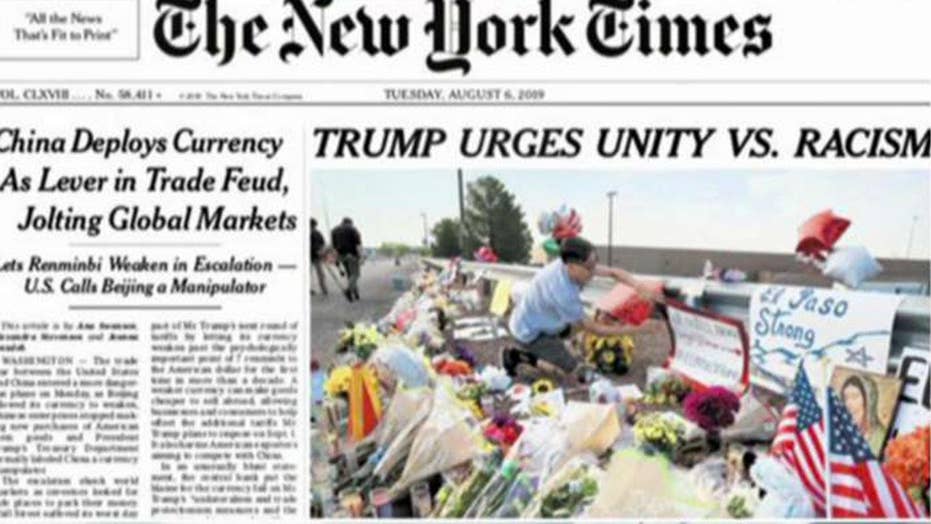 The New York Times has changed a headline on President Trump's response to the weekend's mass shootings after being attacked by the left. Fox News media analyst Howard Kurtz reacts.

The New York Times indicated that it rushed into print a controversial headline that prompted backlash from politicians and liberal commentators.

The front-page headline, "Trump urges unity vs. racism," was apparently too kind to Trump and didn't properly handle the issue of racism, some critics suggested. The story itself was about Trump's Monday remarks  -- following the mass shootings in El Paso, Texas, and Dayton, Ohio -- during which he condemned white supremacy and called for gun reforms.

During that speech, Trump called on the nation to "set destructive partisanship aside — so destructive — and find the courage to answer hatred with unity, devotion and love."

But according to The Times, the headline was "bad." “It was written on deadline and when it was passed along for approval we all saw it was a bad headline and changed it pretty quickly,” Times Executive Editor Dean Baquet told The Daily Beast on Tuesday.

"Let this front page serve as a reminder of how white supremacy is aided by - and often relies upon - the cowardice of mainstream institutions," she tweeted on Monday.

Joan Walsh, a correspondent for The Nation, said she canceled her Times subscription because she couldn't keep "rewarding such awful news judgement."

Neera Tanden, a former adviser to Hillary Clinton, suggested that the Times had caved to Trump's narrative "that he's fighting racism."

"What makes Trump happy is the ability to attack the press in the morning, and then precisely because of his bullying, they accept his narrative that he’s fighting racism. Nothing makes him happier. Indeed, he wants media that kowtow to him to flourish," she tweeted.

"It reported news of the day, invoking @realDonaldTrump actual words in a televised address to the nation. It just was insufficiently rabid & biased for those who unreasonably expect news to be advocacy. Opinion page is for that," she tweeted.