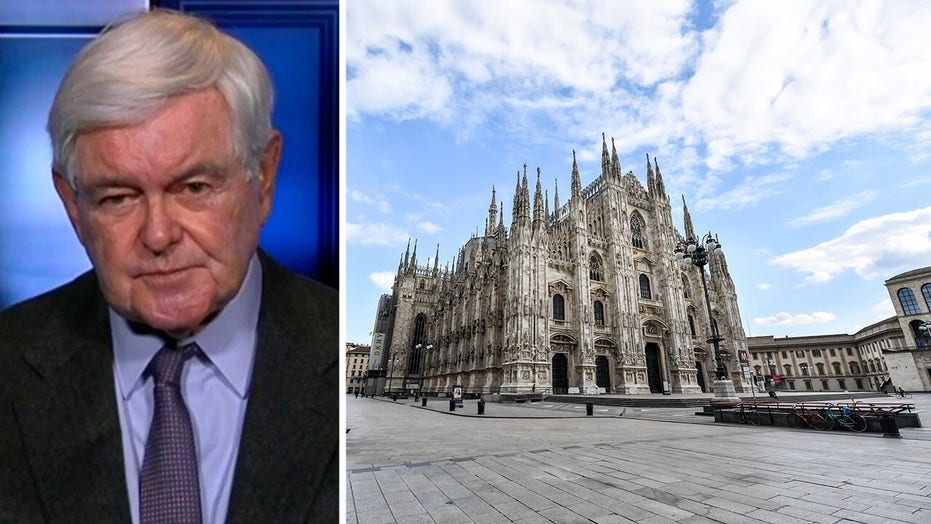 Former House speaker and Fox News contributor Newt Gingrich says the U.S. has many lessons to learn from Italy on the coronavirus pandemic.

Former House Speaker Newt Gingrich, who is currently in Italy with his wife, told the "Fox News Rundown" podcast Tuesday that flight connections between Wuhan and Milan may be the source of the early coronavirus outbreak in the European country, which currently has the highest death rate of any nation affected by the pandemic.

"None of us, at least I didn't know that there were 100,000 Chinese [people] living in northern Italy and that many of them come from Wuhan and that there was a flight between Milan and Wuhan," Gingrich explained.

"We think that's how the virus got Italy early," he added. "Initially, the government didn't realize how dangerous it was going to be ... it dealt with it initially as sort of a small town, local regional problem, and then boom, it exploded."

Italy entered the third week of a nationwide lockdown Sunday, closing all non-essential businesses, as the death toll continued to climb over 5,000.

Gingrich, whose wife Callista serves as U.S. ambassador to the Holy See, said people are acting methodically when leaving their home for essential errands, adding that only a limited amount of shoppers are permitted in a store at a time.

"In the grocery store, for example, they have a limited number based on the size of the store and then people line up outside about six to eight feet apart and they wait patiently," he explained. "And when somebody leaves, a person gets to go in and this goes on all day."

Italy is home to the second-oldest population of the world behind Japan, which Gingrich said could be another important factor in explaining the country's alarming death rate.

"If you get somebody over 70, particularly over 80, if they have pneumonia, if they have diabetes, if they have heart disease, any kind of co-morbidity makes them very susceptible to dying from the virus," he said. "In Italy, the big story had been the number of senior citizens who usually had some other problem."

Gingrich also praised South Korea's early action in response to the outbreak, recounting his experience as a traveler there when the virus first began to spread from China.

"It's been kind of amazing because I was actually in Korea when the virus first broke out of China and I watched the South Koreans respond immediately," he said.

"When you walked into a hotel, somebody met you at the door, checked your temperature, they put a thermometer that could sense your skin. And if you had a fever, you didn't get in. This was very early. And so they were very aggressive," he explained.