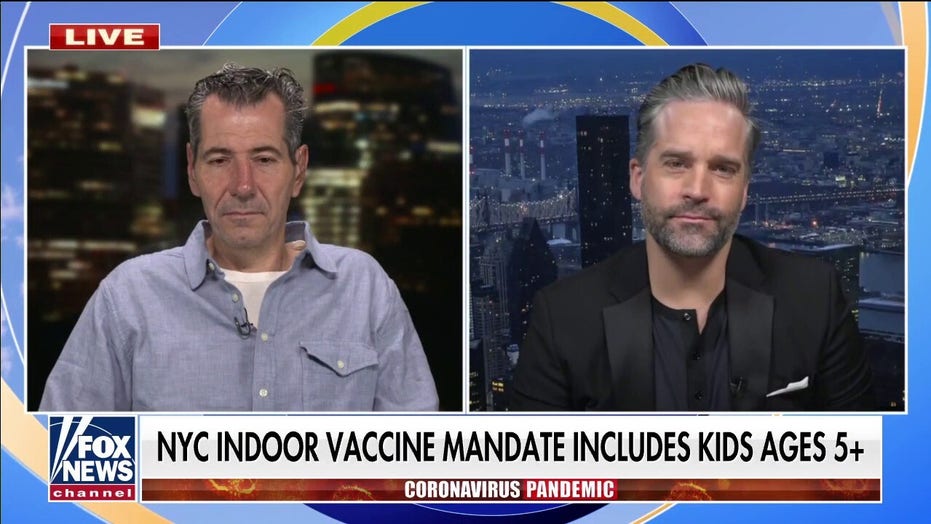 Business owners push back on NYC mandates for kids: ‘We are not the vaccine police’

President of the Restaurant Group Jeremy Wladis and NYC Festival Cafe owner Tyler Hollinger discuss the impact of the new requirements on the hospitality industry.

Two New York City business owners spoke out against the Big Apple’s vaccine mandates for kids on Wednesday during an appearance on "Fox & Friends," arguing that businesses are suffering as a result of Mayor Bill de Blasio’s new requirements.

"The bars and restaurants, the hospitality industry, is not the vaccine police for the mayor," said NYC Festival Cafe owner Tyler Hollinger. "We are not being compensated in any way, shape, or form—and the real victims here are the businesses."

Hollinger said that it is "insane" for businesses to be expected to kick children and families out of establishments, especially during the holiday season, when tourists pay exorbitant prices for travel and lodging to stay in the city.

Jeremy Wladis, President of the Restaurant Group, said that businesses that do not cooperate could be fined and ultimately closed. He called some of the policies in place were "unfair" and "ridiculous," and essentially forced stores to be their own bouncers and doormen.

Wladis added that he understands the importance of getting everyone vaccinated, but proposed that such requirements should occur in a timeframe that works for small businesses, big businesses, and the people of NYC.

On Tuesday the mayor dismissed concerns that the new mandates would impact small businesses, saying, "Even though I always appreciate any concern, if folks in the restaurant community have a concern, if some of our visitors have concerns, I obviously appreciate that deeply. We want to be responsive in every way."

"But at the end, the number one job is to protect people," said de Blasio.