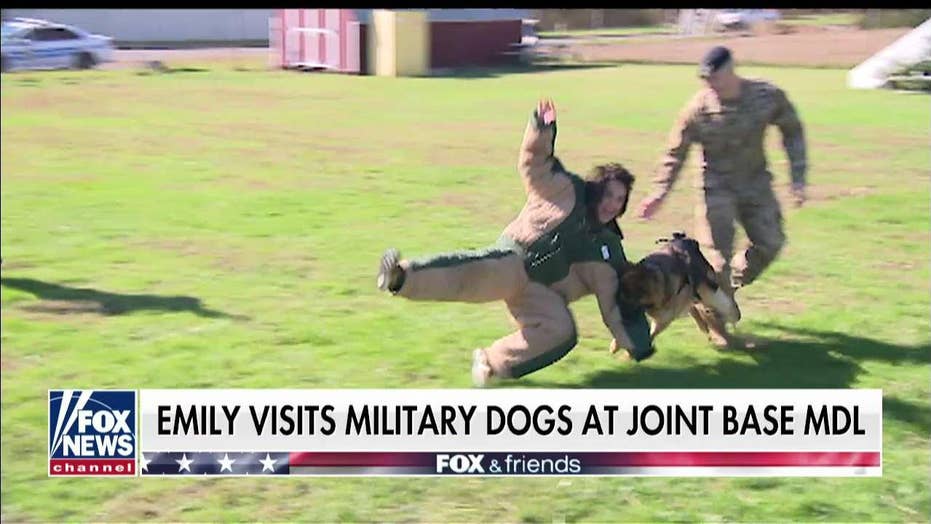 This week Fox News contributor Emily Compagno took a trip to the dog kennel at Joint Base McGuire-Dix-Lakehurst in New Jersey to see how military working dogs are trained to protect U.S. troops every day.

Appearing on "Fox & Friends: Weekend" with hosts Ed Henry, Pete Hegseth, and Rachel Campos-Duffy, Compagno said that she had a "great time" observing canine training but "also got pretty much the scare of [her] life" when she became the fake bait for one of the dogs.

"Those dogs are trained to the nth degree," she told the "Friends: Weekend" hosts.

MILITARY POOCHES ARE SPECIALLY TRAINED FROM BIRTH TO SERVE ALONGSIDE TROOPS

"It's also so exciting and it's incredible to see and witness the bond between those dogs and their handlers, to hear the reverence these soldiers have for their fellow soldiers, for how honorable the entire process is, of course," said Compagno.

While on the base, Compagno spoke with some of the sergeants who said that their main mission is "law enforcement and security of the base."

"Our dogs that are trained as explosive, narcotic, and patrol detector jobs," one soldier said. "Anybody who is committing offenses against the base, bringing contraband onto the base, we'll be there to enhance the base's security."

A Belgian Malinois accompanied U.S. Navy SEALs on the 2011 raid that killed Al Qaeda leader Usama bin Laden. Another was "slightly wounded" in the mission to take out ISIS leader Abu Bakr al-Baghdadi.

The vast majority of military working dogs are trained with the 341st Training Squadron at Lackland Air Force Base in San Antonio, Texas. The dogs first go through 60 days of detection training and 60 days of patrol training. Following that, they go through a certification process and then are released to their duty station.

The base members said that the dog teams are always training to better themselves.

"The bond that you're going to build with these dogs is essential to your success as a dog team," another sergeant told Compagno.