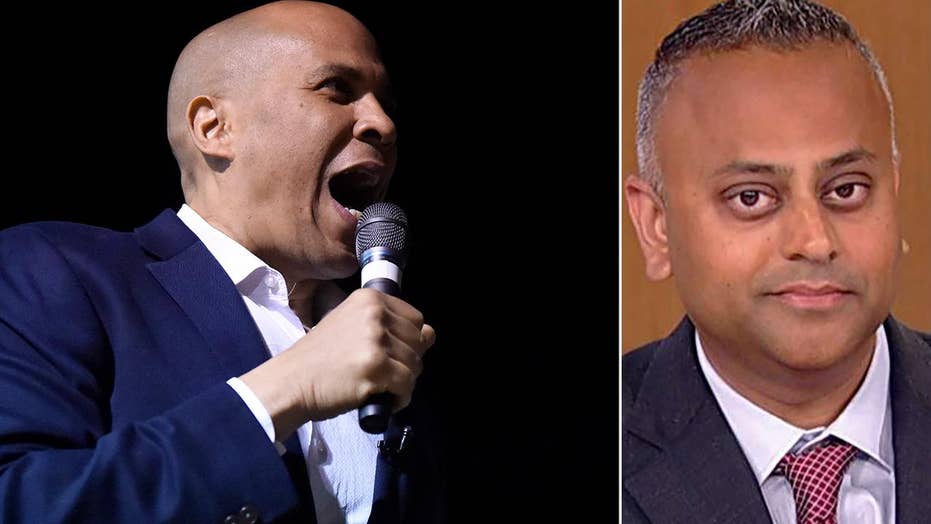 "The View" co-host Meghan McCain knocked Sen. Cory Booker, D-N.J., saying he was "dodging" her questions about gun confiscation, as she suggested former congressman and fellow presidential candidate Beto O'Rourke is more "honest" on the subject.

During Booker's appearance on the daytime talk show, McCain described the 2020 hopeful's previous support for mandatory buybacks as a "left-wing fever dream" and asked him how he thought he'd go into "red states" and take her brother's AR-15 since he's "not giving it back."

"Well, my point is this: I'm not where Beto is, in the way he's been talking about this," Booker responded.

Booker then defended O'Rourke, expressing caution over how "we talk about each other" and saying people shouldn't destroy the character of others, but McCain doubled down, claiming O'Rourke was "really nasty" in their own gun clash.

"You and I both know that just because somebody does something to us, doesn't mean we show the same thing back to them," Booker told the conservative co-host.

"I'm not running for president, with all due respect," McCain shot back. "I speak for a lot of red-state Americans, whether he likes it or you like it or not, there's a lot of Republicans you need to win over."

MCCAIN SAYS MATT GAETZ SHOULD 'GET THE HELL OUT OF CONGRESS,' GET TV JOB AFTER HEARING 'STUNT'

The New Jersey senator then continued to talk about civil discourse, while McCain repeatedly tried to return the conversation to gun buybacks.

"With all due respect, the gun buybacks. The gun buybacks," McCain said as Booker recalled a story about a voter wanting to punch President Trump in the face. "Just tell me semantically how you're going to get my brother's gun back."

"Look, machine guns we don't have on the streets anymore, right? Because, in the 1980s, we banned them, and we had a practical way to do that," Booker said. "From Australia to New Zealand, they banned them and they got them off the streets."

"So, you're going to go to my brother's house," McCain pressed.

"No," Booker responded. "We can find an evidence-based way to accomplish this as a country, other countries have done it. We did it with machine guns. Why are we playing into fearmongers that want to make you this vision that there's people going to show up to your house and take your guns away? That plays exactly into the corporate gun lobby... and I'm giving you examples of how we've done it in the past and how we can together do it in the future."

"How Australia did it. This is America," McCain swiped the candidate.

After the show, Booker's campaign manager Addisu Demissie took a shot at the "View" co-host for her line of questioning.

"Not sure what @MeghanMcCain was trying to accomplish with this question but @CoryBooker as usual handled it with grace, class and substance," Desmissie tweeted.

"You’re Cory Bookers campaign manager. I asked a specific policy question - he says he’s the most direct candidate and I’ll I got was a dodge," McCain told the campaign staffer.

She later added, "At least Beto is honest about the fact that he wants to take our guns away."