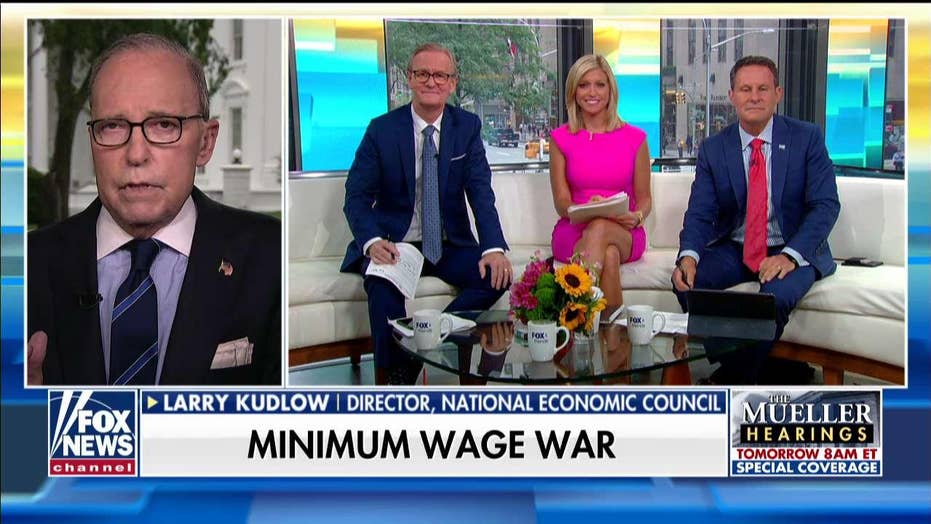 Top White House economic adviser Larry Kudlow responded Tuesday on "Fox & Friends" to Rep. Rashida Tlaib's call for a federal minimum wage of $20 per hour, arguing that it would lead to millions of job losses among small businesses.

Tlaib, D-Mich., made the pitch at an event in Detroit on Sunday night, prompting mockery from conservatives and threatening to force Democrats in the 2020 presidential race to address the issue. Kudlow, director of the National Economic Council, stressed that small businesses cannot afford to pay such a wage and would be forced to cut jobs in response.

Host Ainsley Earhardt said a friend who owns restaurants in Florida told her a $20-per-hour minimum wage would "kill" her businesses.

Tlaib, referring to the federal minimum wage for those workers, said that "tipped employees make $2.13 per hour, federally."

"Think about that for one minute. People cannot live on those kind of wages, and I can't allow people to be living off tips, you know, relying on tips for wages. It's just not enough to support our families. ... By the way, when we started it, it should have been $15," she told the Restaurant Opportunities Center of Michigan and the labor rights group One Fair Wage.

The Democrat-controlled House of Representatives passed a $15 federal minimum wage bill last week, but it has little chance of passing the GOP-controlled Senate.

"Yes, some wages go up for some set number of millions of workers, but we also lose millions of jobs because a lot of these small businesses can't afford it," said Kudlow.

He said the "remedy for minimum wage" is to keep the "across-the-board" economic boom going.

"We can have unlimited minimum wage through private-sector prosperity," he said.