K.T. McFarland: FBI abuse of power is a pattern, 'they targeted me'

K.T. McFarland, fmr. Deputy National Security Advisor, says the FBI attempted to catch her in a perjury trap and tried to turn her on Gen. Flynn and President Trump

In an interview on the "Brian Kilmeade Show," McFarland said Tuesday that because she had not been allowed to communicate with Flynn at all during the FBI's investigative process or his trial and eventual guilty plea in 2017, she had not realized that the FBI had employed the same tactics in her questioning.

KT MCFARLAND RESPONDS TO FLYNN DOCUMENTS: FBI'S GOAL WAS TO 'GET TRUMP,' WE 'WERE COLLATERAL DAMAGE'

"I have not been able to talk to General Flynn since he left the White House. His lawyers and my lawyers wouldn't let us talk to each other to protect us. And so, I didn't' realize what they did to him was exactly what they did to me except worse in his case," she remarked. "And, that's what surprised me is that we've all been sort of suffering in silence and yet this abuse of power was a pattern.

"With no preparation, they implied: 'you don't need a lawyer.' In my case, when I asked them, 'Do I need a lawyer?' when they showed up at my house on Long Island, they said, 'Well, we can't tell you not to get a lawyer. But, we really don't -- you know we're not targeting you. We're not looking at you as having done anything wrong. We just want you to help us find out what the Russians did and how we can prevent the Russians from doing it again.'

"I wanted to find that out too," she admitted. "I mean, I'm a national security person. But, it turned out that that's not what they were doing."

"And so, in my case," she continued, "they wanted me to say that Flynn and the president had done stuff that they hadn't done. They implied that if I implicated the president especially, that...my problems would go away.

"But, when I wouldn't do that, then they threatened to charge me with a crime: perjury for lying to them," McFarland told Kilmeade.

"And, when I said I wouldn't plead guilty to that either, they'd have to take me to court, that's when they kind of backed off and went after others," she concluded. 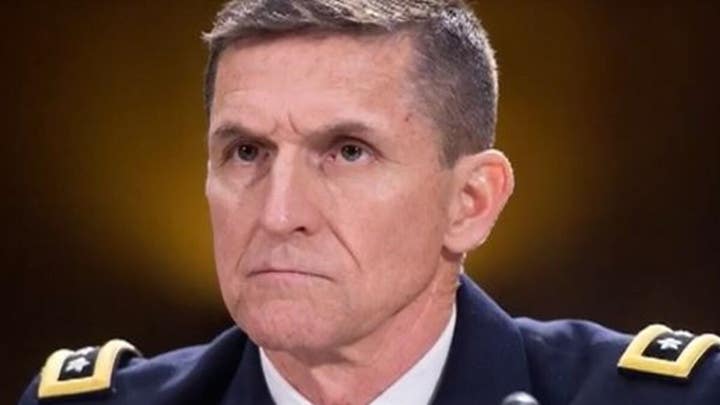 Newly revealed documents pertaining to Flynn's case reveal that FBI leadership was discussing whether their “goal” was “to get [Flynn] to lie, so [they could] prosecute him or get him fired.” The unsealed notes further suggest that agents planned, in the alternative, to get Flynn “to admit to breaking the Logan Act" during his dealings with former Russian ambassador Sergey Kislyak.

The memo appears to weigh the pros and cons of pursuing those different paths, although noting that if the bureau was seen as playing games, the White House would be "furious."

The Flynn revelations come as the Justice Department separately has revealed that the FBI's investigation into former Trump aide Carter Page was riddled with fatal errors -- and even featured an ex-FBI attorney deliberately doctoring an email from the CIA to make it seem as though Page's Russian contacts were nefarious.