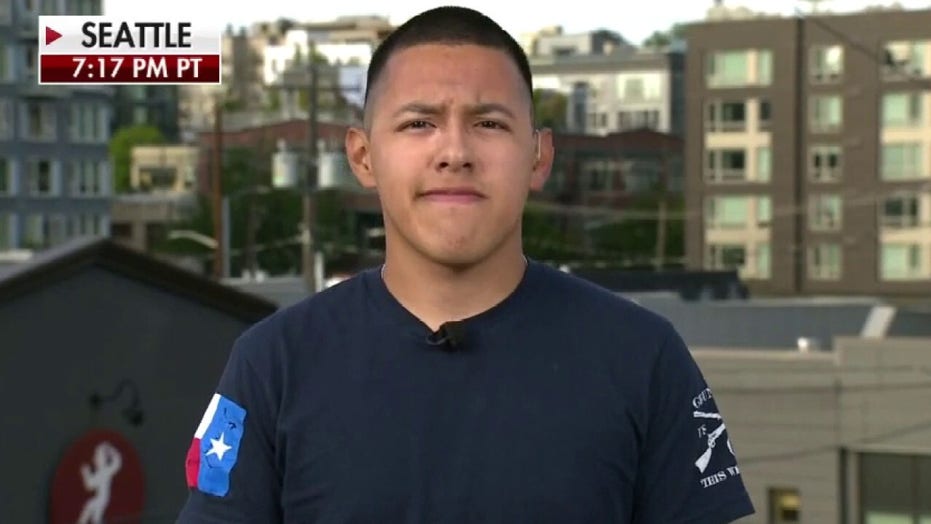 Townhall senior reporter Julio Rosas, who is on the ground in Seattle covering the city's police-free “Autonomous Zone,” thinks the mainstream media is downplaying the story, and that coverage would be more hostile if President Trump supporters had taken over parts of a city.

Liberal news outlets have largely downplayed the six-block downtown area, dubbed the “Capitol Hill Autonomous Zone” (CHAZ), because of its location in the city's Capitol Hill neighborhood. CNN has dismissed the chaos, while The New York Times celebrated it as “a homeland for racial justice.”

President Trump told Fox News' Harris Faulkner in an exclusive interview Thursday that his administration is "not going to let Seattle be occupied by anarchists." But as of Friday morning, the “Autonomous Zone” remained in full effect, and Rosas is there to document every turn. He has reported “tensions within the loose coalition of people occupying the area” and appeared on Fox News’ “The Ingraham Angle” Thursday night to note the latest developments.

In an email interview with Fox News' Media Angle, Rosas explained what CNN has gotten wrong, the most unbelievable thing he’s seen on the ground, and how he prepares to cover potentially violent events.

MEDIA ANGLE: What’s the biggest misperception from the media when it comes to covering Seattle’s “autonomous zone"?

Rosas: I think the biggest misperception in the media is that only good things are happening in and around the autonomous zone. As I have been documenting the past few days, things are not all sunshine, rainbows and unicorns. There has been fighting, there was an armed "warlord" and there have been threats of violence. Yes, things have been mostly peaceful, but that's not all that's happening here.

MA: You noted on “The Ingraham Angle” that CNN has misrepresented what’s going on in Seattle’s “CHAZ.” What have they gotten wrong?

Rosas: CNN is trying to claim there are no armed members of Antifa here in the zone, but that is simply not true. As others have documented, there have been Antifa types who have carried guns in the zone, along with other types of people. I have seen some armed with wooden or metal poles. They are mainly on the barricades that have been set up in an attempt to keep out law enforcement or anyone they think is a white supremacist.

MA: Why do you think CNN and other mainstream media outlets have attempted to dismiss what’s occurring in Seattle?

Rosas: Honestly, I'm not surprised the mainstream media is trying to downplay what's happening here. We saw an MSNBC reporter trying to downplay the riots in Minneapolis as a building was on fire behind him. You can bet your bottom dollar the coverage of this zone would be more hostile from the media if it was Trump supporters who took over parts of a city. As to why they are trying to dismiss what is happening, I do not know for sure.

"You can bet your bottom dollar the coverage of this zone would be more hostile from the media if it was Trump supporters who took over parts of a city."

Rosas: The most unbelievable thing I've seen so far is just the abandonment of the Capitol Hill neighborhood by the Seattle city government. When I was in Minneapolis, while they did abandon parts of the city for a few days, they did give clear intentions of taking back the area. In Seattle, we've seen the opposite. Not only have they signaled that they do not intend on taking back the East Precinct anytime soon, but they are enabling the occupiers by providing porta-potties and keeping most of the barricades in place.

MA: How do the things you’ve observed in Seattle this week compare to other protests you’ve covered?

Rosas: As I said, things are mostly peaceful and that is a big difference from Minneapolis, but the only reason it's peaceful is because the local and state government is taking an appeasement approach to the situation. As history tells us, appeasement is only a short-term solution and I can say the occupiers do not plan on leaving anytime soon.

MA: How do you prepare before going out in the field when violence could erupt at any moment?

Rosas: I have my bag on me at all times. I always carry water (hydrate or die), snacks, portable chargers for my phone, a few first aid items, and I won't go into too much detail, but I am prepared to defend myself if it comes to that. I don't go looking for a fight wherever I go, I am there to report on what's happening, but I do to take steps to ensure I'm able to go back home when I'm done with my assignment.