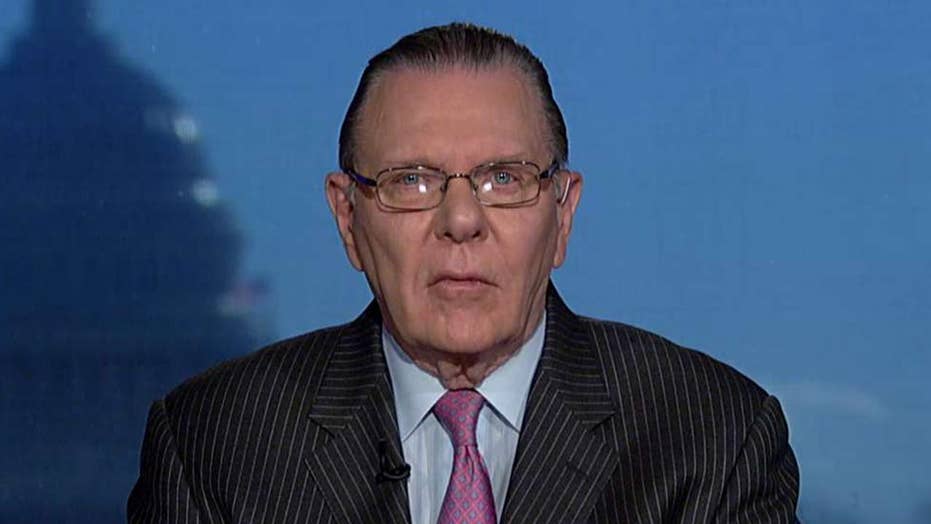 Gen. Keane: The Iranians don’t want a war with the US, they would lose their regime

After President Trump declared that Iran “appears to be standing down” in the wake of Tuesday's missile strikes on Iraqi airbases, Fox News senior strategic analyst Gen. Jack Keane said that Trump had executed a diplomatic strategy that could enable the U.S. to negotiate with Iran without further military action.

“It changed from the strategy of appeasement under the Obama administration to confrontation using economic pressure to do that,” Keane told “The Daily Briefing” Wednesday.

“The American people should be extremely grateful and happy,” Trump said in an address to the nation from the White House the morning after the attacks. “No Americans were harmed in last night’s attack by the Iranian regime.”

While the attacks marked the latest escalation with Tehran in the precarious aftermath of a U.S. drone strike that killed top Iranian general Qassem Soleimani last week, they also appeared to open the door to reducing tensions after it became clear that no American forces were killed. Trump indicated Wednesday that he indeed considers the nature of the strikes as a sign that Tehran has taken an off-ramp.

At the same time, Trump said the U.S. continues to evaluate options and would immediately impose economic sanctions "until Iran changes its behavior." He also called on other world powers to break away from the Iran nuclear deal and called on NATO to become more involved in the Middle East.