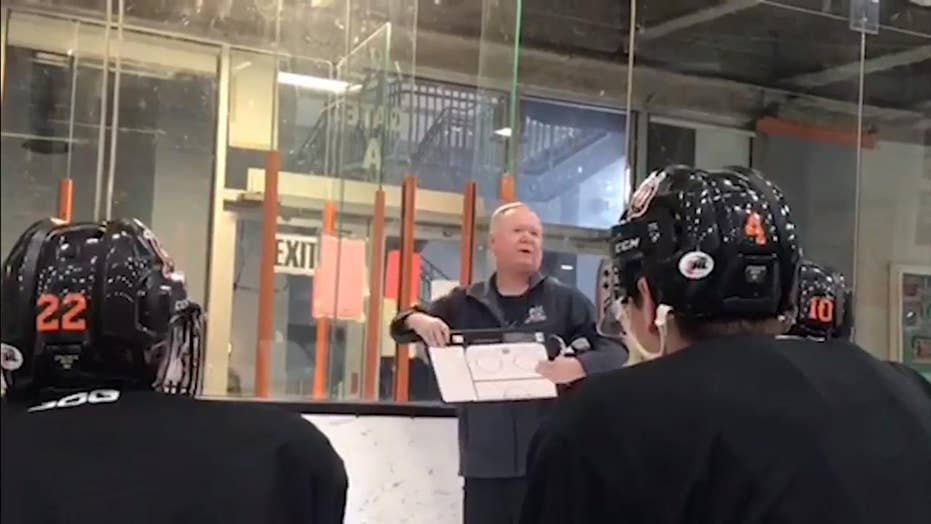 A Connecticut hockey coach who made national headlines for demanding that his players honor the American and Canadian national anthems has been awarded Fox Nation's inaugural "Most Patriotic Sportsman" award.

John Krupinsky, assistant coach for the Danbury Hat Tricks of the Federal Hockey League, was the star of a video that went viral after he was filmed telling his team that anyone contemplating a protest during the playing of the "Star-Spangled Banner" should quit immediately.

Krupinsky made very clear to his players that such behavior was not acceptable to him either.

"We're not women's soccer. We're not the NFL," he said in the viral video. "If there's anybody here that's going to be disrespectful to either the American or the Canadian national anthem, grab your gear and get the f--- out now because you'll never see the ice in this arena."

"We don't have that problem in hockey," he continued. "We're better than that. But there's no sense in wasting anybody's time if that s--- was going to happen."

Krupinsky is also a police sergeant with the Danbury Police. He has served with the department for more than 30 years.

He told Fox News, "I take pride in my country, the flag, I've unfortunately seen it covering too many coffins and I think we can take time out to give two minutes worth of respect to our soldiers, to our firemen and to our policemen. I don't think that's asking too much and I'm not going apologize for asking players to show a little bit of respect when it's either the American or Canadian national anthem."

On Nov. 6, Fox Nation is hosting its inaugural Patriot Awards in St. Petersburg, Fla. All proceeds will be donated to the Folds of Honor Foundation. You can watch the event livestreamed on Fox Nation at 7:30 p.m. ET.

To watch videos for all the Patriot Award recipients go to Fox Nation and sign up today.  The awards will be announced throughout the week, beginning on Monday, October 28.