U.S. food banks are facing unprecedented demand from Americans in need of food assistance, as unemployment claims surged to more than 6.6 million last week, breaking a record high for the second week in a row amid the coronavirus pandemic.

"We're definitely feeling the impact of families and individuals, many who've been laid off or have been furloughed, had hours cut back, needing that food assistance," Michael Flood, president and CEO of Los Angeles Regional Food Bank, told Fox Nation's Abby Hornacek.

"Just last week, the L.A. Regional Food Bank distributed 2 million pounds of food, which is a record distribution amount for us--49 percent higher than last year," he said.

That is a story repeated over and over again across the country as economic analysts warn that the jobless numbers will likely continue rising in the coming weeks as mandated social distancing policies remain in place.

MAP OF CORONAVIRUS CASES ACROSS THE U.S.

Leslie Bacho, CEO of Second Harvest Silicon Valley in San Jose, Calif. reported a 50 to 100 percent increase in the number of people showing up at their facilities.  Phone calls to their hotline have increased from 200 to 1,000 calls a day.

The Greater Boston Food Bank in Massachusetts reports having experienced a 50 percent increase in demand.

Tom Curtis, president and CEO of St. Mary's Food Bank, the world's first charity of its kind, said his organization is coping with strains to their own food supply.

"From a donation standpoint, our grocery stores typically represent about 20 percent of the food that we receive that we then give out to people in need." 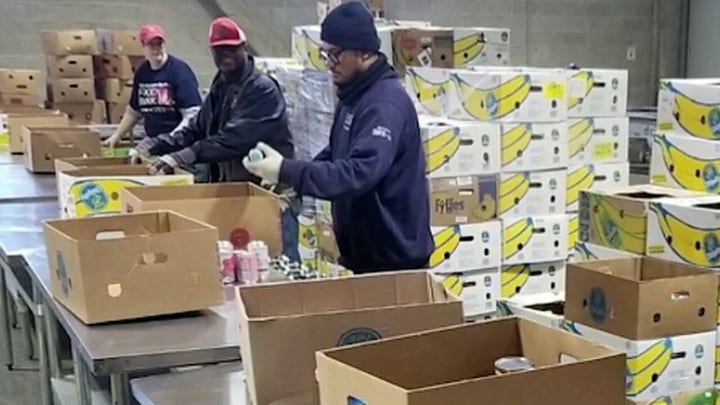 "In the last few weeks, we've seen our numbers more than double -- just in our own distribution," Curtis continued. "We would typically do 600 to maybe 650 families a day. Yesterday we had 1,349. Today appears to be another record... We see that number increasing dramatically every day."

Another challenge for food banks is that the pool of volunteers needed to help distribute food has been diminished by stay-at-home measures.

"We've seen a lot of groups cancel," said Flood. "High schools, colleges, companies are a good source of volunteers for us in normal times. A lot of those commitments are not currently there."

In some states, the National Guard has stepped in to supplement the volunteer effort.

"A couple weeks ago the governor activated the National Guard here in Arizona," said Curtis. "We're grateful to have that resource so we can help to take care of the people in need within our community.

"At St. Mary's, one thing I want people to know about us is that you can count on us," concluded Curtis. "We're here for the community. We've been here for 52 years going on 53. And we're going to be here for the long haul -- no matter what this pandemic throws at us."

To watch more of Abby Hornacek on "Tales of Social Distancing," as well as episodes with other Fox Nation hosts like Tomi Lahren and Kacie McDonnell, go to Fox Nation and sign up today.