Capitol police officer killed after suspect attacks him with car

Fox News chief congressional correspondent Chad Pergram has the latest on the killing of Ofc. William Evans, on 'Special Report'

CNN anchor Don Lemon once told Nation of Islam leader Louis Farrakhan that it was an "honor and a pleasure" to meet him, in a gushing 2007 interview he later described as "amazing."

"Thank you again for doing this. It’s an honor and a pleasure to meet you," Lemon told the pastor, who has led a chant of "death to America" and called for a separate state for Black Americans.

WHAT IS THE NATION OF ISLAM?

Last year, Farrakhan was among several far right or "hate" figures that Facebook permanently banned, but before that time he was normalized by many in the media, celebrity and Democratic political worlds.

But there was little sign of caution in the 2007 interview with Lemon, although he did ask about claims against him noting that "people say that you're an anti-Semite" -- something Farrakan denied.

"Minister, you know I have to put you in that category as well for someone who people would want to remember," he said elsewhere in the interview. "You have to think of yourself that way and the impact you’ve had not only on the country but the world." 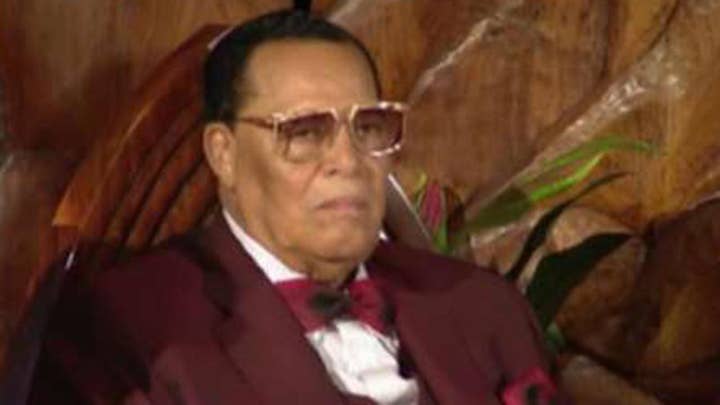 After the interview, Lemon wrote in a piece for CNN.com about what he found.

"When I sat down with Nation of Islam leader Louis Farrakhan, I was surprised by what I found: a softer, more conciliatory Farrakhan -- a man who says his battle with cancer has changed him in ways he'd never imagined," he said. "He says he now wants to work together with all people and all religions to bring about peace in the world."

CELEBRITIES ONCE LINKED TO LOUIS FARRAKHAN

Lemon also described his interview as "amazing" on air.

"Oh, it was amazing because he doesn't let anyone in his home. I mean, it's rare. And I think -- as far as I know, maybe one or two reporters got a chance to do this. We were supposed to do it earlier, but he was so sick that we had to cancel several times. His doctors said he couldn't do it," he said. But to go into his home, we interviewed his wife. Never happened. We also interviewed his daughter. That never happens. Nine children. So it was amazing."

Ties to Farrakhan have re-emerged in the light of the revelation that the suspect in a deadly Capitol attack on Friday. Noah Green allegedly slammed his sedan into two police officers near the Capitol’s North Barricade, the entrance where congress members and their aides come and go.

Green included photos and videos of Nation of Islam rallies on his Facebook page and identified himself on the page as a "Follower of Farrakhan." Green praised Farrakhan, an outspoken anti-Semite, as "Jesus" and former NOI leader Elijah Muhammad as "the exalted Christ."

The most recent post on Green's Facebook page was a YouTube video of a 2009 Louis Farrakhan speech titled, "The Crucifixion of Michael Jackson." In it, the Nation of Islam leader said Jesus was not the Messiah and called Christian theology a lie.

In 2009, CNN host Lemon interviewed Farrakhan about Michael Jackson and gave him significant room to talk about the singer, and his struggle with his identity.

Lemon is not the only one to have tread carefully around the preacher. Several Democratic members of Congress have known ties to Farrakhan and the Nation of Islam.

House Majority Whip James Clyburn, D-S.C., shared a stage with Farrakhan in 2011. After the event, Clyburn told the Final Call, the Nation of Islam's media arm, that he was "not bothered in the least bit" by people criticizing his appearance with Farrakhan.

Rep. Danny Davis, D-Ill, praised Farrakhan in 2018 as "an outstanding human being" who "does outstanding things," while Georgia Democratic Sen. Raphael Warnock has also spoken positively about Farrakhan's group.

Rep. Maxine Waters, D-Calif, has longstanding ties to Farrakhan and was seen on video hugging the Nation of Islam leader.