On Thursday, House Speaker Nancy Pelosi called for Democrats to "proceed with articles of impeachment." Her announcement came following the release of a 300-page report from the Intelligence Committee which accused the president of placing his own personal and political interest before the United States, seeking to undermine the integrity of the presidential election process, and endangering national security.

Appearing on "America's Newsroom" with host Bill Hemmer, the California congressman said it would be unfair to President Trump to predict whether Democrats have the votes to pass an impeachment. But he expressed confidence that there are "enough responsible people in the House to hold the president accountable."

He said that Democrats have to "make sure people understand just what's at stake here" and that they want the American people to "understand what the president did ... is wrong and people need to be held accountable when they commit wrongdoing like that."

"The facts are powerful, but the process behind the facts also [has] to be fair," he said. 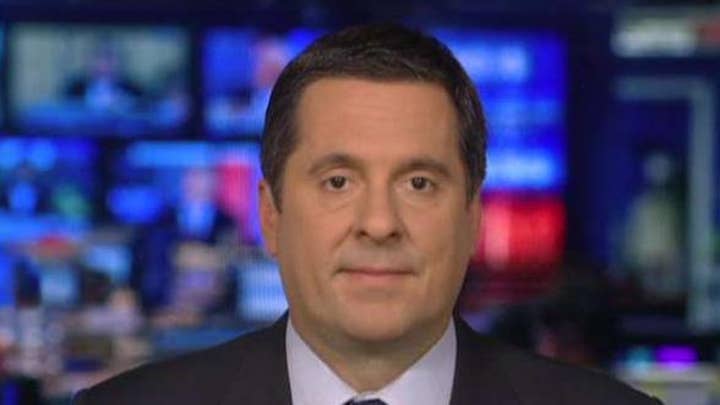 Hemmer asked Swalwell why Schiff was making these phone numbers public, with Swalwell answering that a "better question" is why Nunes was talking to Giuliani and Parnas at a time when a "smear and clear campaign" by the president was taking place to remove the Ambassador to Ukraine Marie Yovanovitch.

"That's an accusation," Hemmer pushed back. "You're already drawing a conclusion..."

"The call records are clear," Swalwell responded. Ranking Member Nunes was talking to these individuals and what is really striking is that he used all of this time during the public hearing to attack Adam Schiff."

"If you don't talk to indicted felons, you don't end up on call records," he concluded.