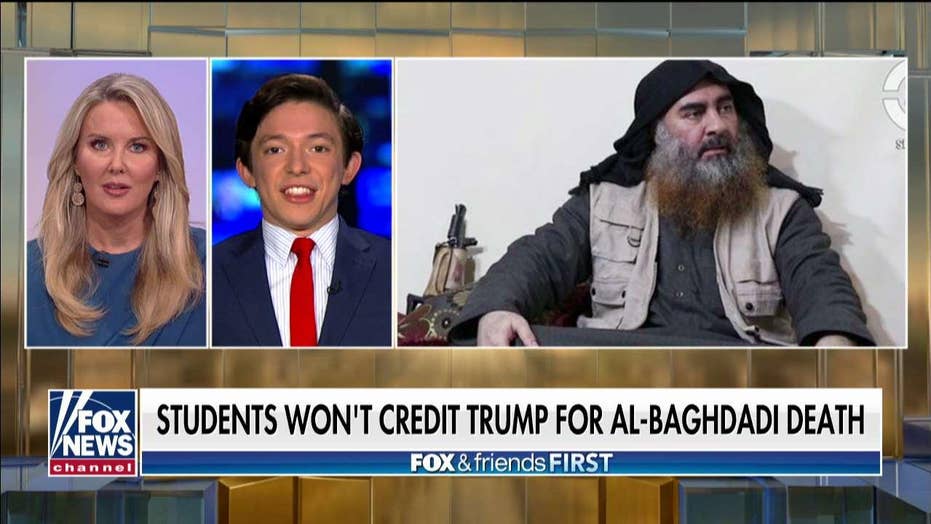 Students on liberal-leaning college campuses are biased against President Trump because they are subjected to a single viewpoint,&nbsp;Campus Reform digital reporter Eduardo Neret said Wednesday.

Campus Reform digital reporter Eduardo Neret went to Washington, D.C.'s Georgetown University campus this week to ask if students thought the president should get credit for the killing of Baghdadi.

Responses varied, but the general consensus on campus was that the president did not deserve credit for the win in the fight against terror.

"F--- Donald Trump," one student emphatically stated when asked whether he would give Trump credit.

"I mean, I guess it happened despite him ... He didn't f--- it up too bad," mused another female student, who also refused to credit the president.

"I think it's the troops that did the real work [who] deserve the credit," said another student.

One female student, however, did applaud Trump, arguing he deserves credit just as President Obama did for the operation that killed al Qaeda leader Usama bin Laden in 2011.

"[Trump] has done a lot of great things with our military," she said.

One male student even admitted to Neret that he's a "hypocrite" for believing Obama deserved credit, while Trump should not be praised.

Another said that Obama handled it with "more grace and presidential leadership" than Trump. Some of the students objected to the idea of Trump taking credit for someone dying, even if it was a brutal terrorist leader.

"OK, great. Whatever, but still, it's someone dying. He was a bad person, I guess," said one female student.

Appearing on "Fox & Friends: First" Wednesday with host Heather Childers, Neret said that students' hatred for the president prevents them from looking at the situation objectively, calling some of the responses "insane."

"If you're getting this information in every aspect of your daily life, you're not going to get another viewpoint," he explained.