Appearing on "Fox & Friends: First," Drewer, a Georgetown student, said that students at the annual immigration conference showed up specifically to hear McAleenan and felt slighted by protesters who shouted down the secretary.

Before the secretary even began to talk, protesters stood up and shouted: "When immigrants come under attack, what do we do? Stand up, fight back!"

"A lot of my fellow students are disappointed at the behavior of the protesters because we have a unique opportunity as students at Georgetown to have speakers such as Acting Secretary McAleenan -- and other government officials -- to offer their perspectives and experience with us," Drewer explained. 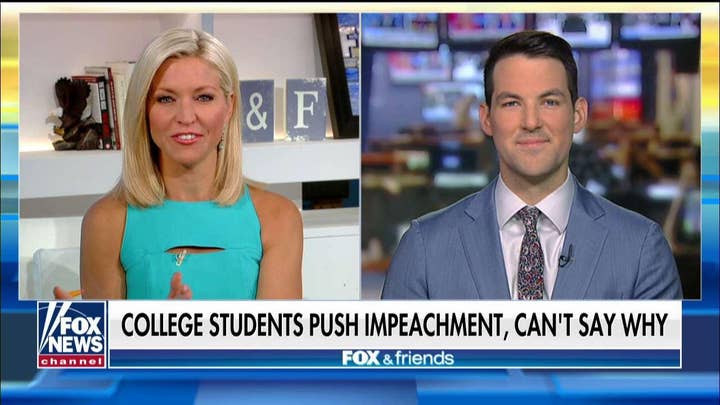 "And, it's a valuable insight we have into government regardless of the students' political beliefs," he said. "I really wish that we could set aside our partisanship and take these opportunities as what they are: very valuable for our education."

A statement released by Georgetown University Law Center Dean William M. Treanor said: "We do not limit speech -- either on the content of the view or the person expressing the view...We share our partners' regret that the audience did not get to hear from the Secretary...Georgetown Law is committed to free speech and expression and the ability of speakers to be heard and engage in dialogue."

The Department of Homeland Security echoed those concerns: "The First Amendment guarantees all Americans the right to free speech and assembly. Unfortunately, that right was robbed from many who were scheduled to speak and attend today’s event at Georgetown. Unfortunately, the Acting Secretary and the audience did not get the opportunity to engage in a robust dialogue this morning due to the disruptions of a few activists."

"The students who came there to hear from the speakers had a right to learn from the speakers," Drewer added. He believes that the university should have moved the protesters and continued the event.

"I think since we live in such partisan times and since Georgetown is a very politically interested school ... I think that you'll see, probably, more protests and more strong opinions among Georgetown students," he said.

"I think that we can do it in a more civil fashion and in a way that doesn't deprive people of their rights to free speech and access to education."