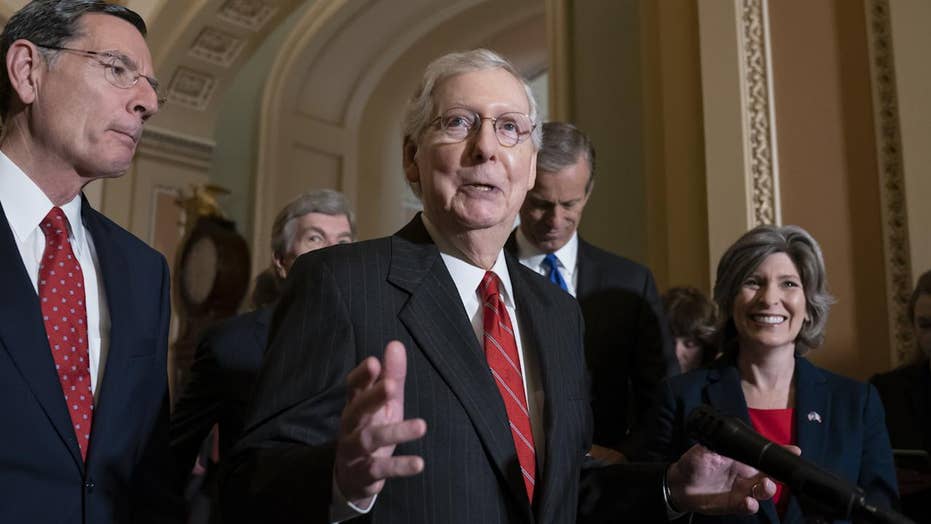 Mitch McConnell: What to know

Did you know that Mitch McConnell’s legal first name is Addison? Check out this list of interesting facts and things you need to know about Senate Majority Leader Mitch McConnell.

New York Times and CNN contributor Wajahat Ali declared on Monday that he still has faith in America because a hashtag that some say promotes violence against Sen. Majority Leader Mitch McConnell, R-Ky. was trending on social media.

Ali's now-deleted tweet said, “#MassacreMoscowMitch is trending. I still have faith in America.”

The New York Times and CNN did not immediately respond to separate requests for comment and whether or not they condone the tweet.

The hashtag that Ali is proud of, "#MassacreMoscowMitch," trended on social media in the wake of mass shootings in El Paso, Texas, and Dayton, Ohio. The mashup hashtag combines two other trending hashtags targeting McConnell: #moscowmitch and #massacremitch.

Twitter did not immediately respond when asked if the tweet violated its policies prior to being deleted.

CNN contributor Wajahat Ali said he has faith in America at the expense of Sen. Majority Leader Mitch McConnell.

“What I’d like for him to do is have some ownership over his role of stoking fear, and hate and racism, especially against immigrants and Hispanics,” Ali said.

On Sunday, a group of protesters supporting gun control gathered outside the home of McConnell, who is currently recovering from a fall he had over the weekend, leaving him with a fractured shoulder.

Protestors outside his home were shouting "No Trump, no KKK, no Fascist USA!" while others called him names like "Murder Turtle" and made loud noises by banging objects and dragging a shovel back and forth on the ground as a group of security personnel stood between the protestors and the home, WLKY reported.

Multiple Democrats, including Rep. Ocasio-Cortez and Sen. Bernie Sanders, have been calling on McConnell to bring a vote to a gun control bill that was passed by Democrat-controlled House back in February. The Senate majority leader declined to bring forward the bill but said Monday that he’s willing to consider “bipartisan” solutions in the wake of the mass shootings as long as those measures don't infringe “on Americans’ constitutional rights.”

This wasn’t the first time the Senate Majority Leader has been confronted by protesters. Last October, a man yelled at McConnell as he dined with his wife, Transportation Secretary Elaine Chao, at a Louisville restaurant.