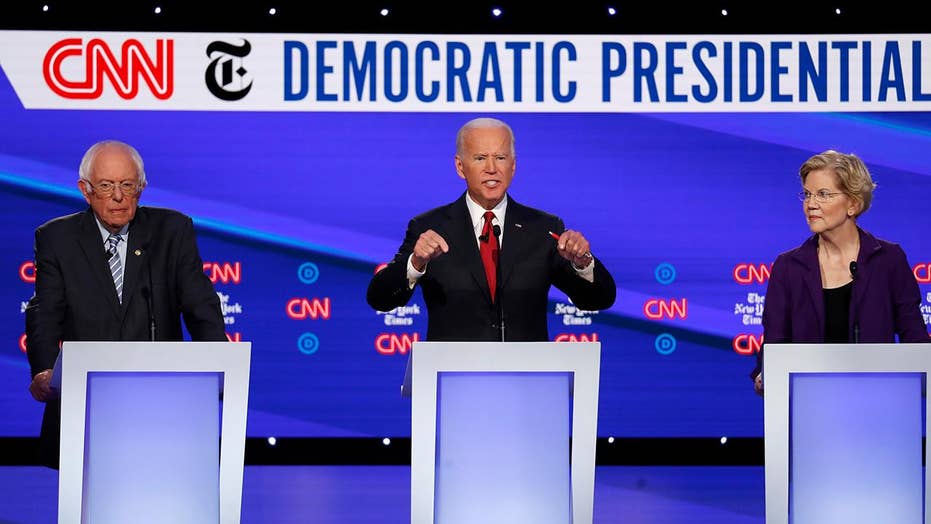 Democrats push for impeachment during Democratic debate in Ohio

CNN’s Democratic presidential debate was criticized by everyone from media watchdogs to the candidates themselves following Tuesday’s showdown — with complaints ranging from perceived favoritism of Sen. Elizabeth Warren to attacks on the specific questions asked by moderators.

“The network is under heavy criticism from the left and right today, and rightly so,” Concha said. “Its pursuit of sizzle over steak and focus on social issues over truly substantiate matters – economy, jobs, opioid crisis, border crisis, all-things China – has damaged the network's credibility even further.”

CNN partnered up with The New York Times for the event, which was moderated by CNN's Erin Burnett and Anderson Cooper and Gray Lady editor Marc Lacey. While viewers complained about several issues with the moderators, a question Cooper asked about Ellen DeGeneres and former President George W. Bush’s friendship was perhaps the most lampooned.

“Three hours and no questions tonight about climate, housing, or immigration,” Julian Castro tweeted. “Climate change is an existential threat. America has a housing crisis. Children are still in cages at our border. But you know, Ellen.”

“These issues are too important to ignore,” Harris wrote.

While Castro and Harris used social media, Rep. Tulsi Gabbard, D-Hi., slammed CNN and The Times directly from the debate stage over what she described as "smears" against her on foreign policy.

"The New York Times and CNN have also smeared veterans like myself for calling for an end to this regime-change war," Gabbard said. "Just two days ago, The New York Times put out an article saying that I'm a Russian asset and an Assad apologist and all these different smears. This morning, a CNN commentator said on national television that I'm an asset of Russia -- completely despicable."

“The time imbalance was so obvious and quite unfair to Gabbard, Castro and the others.  That Warren is now or at the top of recent polls is no excuse for allowing such an imbalance,” McCall told Fox News. “A candidate forum is supposed to give all candidates a fair opportunity to engage the dialogue and that absolutely did not happen. The debate moderators apparently don't own stopwatches.”

McCall said the imbalance “lends credence to the critics who say these forums are all about promoting some candidates over others” and Warren was clearly the favorite.

“The moderators were also quite powerless at times when they tried to move on or determine who would speak next. Candidates tended to ignore the moderators’ directions and interrupt as they wanted,” McCall said, adding that talking over the moderators is nothing new.

“This is standard procedure now in these televised spectacles, but it remains a weakness in the format and relegates moderators to bystanders at times,” he said.

The debate came hours after a secretly recorded video appeared to show a CNN staffer saying the network likes Warren “a lot” and dislikes Gabbard. CNN’s own Twitter account even pointed out that Gabbard received less time than other candidates. According to CNN itself, Warren spoke for over 22 minutes, followed by Biden’s 16-plus minutes, while Gabbard only spoke for roughly eight minutes.

Following the debate, Gabbard’s sister criticized CNN via a tweet sent by the candidate’s verified account that accused the network of cutting off Gabbard to “protect Warren.”

“It was no surprise that CNN began with almost 20 minutes talking about impeachment and defending the Bidens seeing as how CNN's been obsessed with impeachment for at least three years now,” NewsBusters managing editor Curtis Houck told Fox News.

“Between cutting off Tulsi Gabbard and asking far-left, leading questions on abortion, gun control, and the Supreme Court, CNN reminded America last night just how invested they are in defeating and removing the President from office,” Houck added.

Conservative strategist Chris Barron told Fox News that the debate was harmful to candidates because liberal moderators were so easy on them.

“CNN is actually doing a disservice to the Democratic candidates and to Democratic voters by refusing to ask tough questions of the front runners,” Barron said. “Whoever the Democrats nominate will have to square off against President Trump on the debate stage and I promise you he won’t treat the nominee with kid gloves”

Media Research Center Vice President Dan Gainor told Fox News that CNN wouldn’t be a “neutral referee” because of its own bias and that was before the debate even started -- and the moderators didn’t do anything to change his mind.

“CNN, which has done as much as any outlet in America to promote impeachment, began the entire debate with 12 questions on the subject – one easy one for each candidate,” Gainor wrote following the debate.

CNN and The Times were also heavily criticized for overlooking China, which has been a focal point of the recent news cycle. China made headlines in recent weeks between its trade war with the United States and the growing tensions between the communist nation and the NBA – but the moderators didn’t seem to care what 2020 candidates thought about the situation.

“It's patently amazing that the network couldn't find the time over three hours to ask one question about arguably a Top-3 topic going into the 2020 election, China, but did ask as its final question of the night about the friendship between Ellen DeGeneres and George W. Bush,” Concha said.

Plenty of others took to Twitter to chime in on the debate, too:

Fox News’ Joseph A. Wulfsohn and Gerren Keith Gaynor contributed to this report.