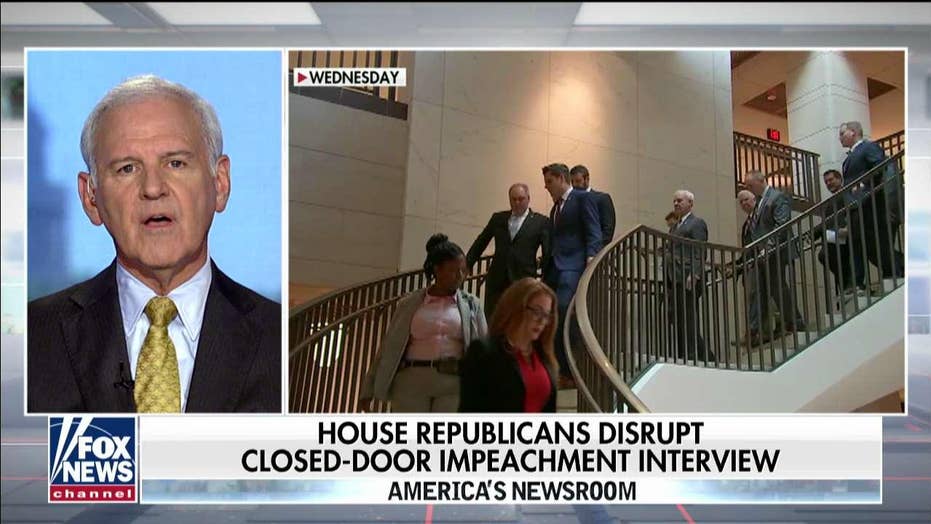 Alabama Republican Rep. Bradley Byrne says members of Congress are not meant to be prosecutors and calls for transparency in all impeachment inquiry proceedings.

Appearing on "America's Newsroom" with host Sandra Smith, Byrne, R-Ala., said that after he and around two dozen other Republican House lawmakers disrupted a closed-door hearing yesterday in a Sensitive Compartmented Information Facility (SCIF), one of the Democrats said that the basis for having private testimony was that they were "having to perform the work of a special prosecutor."

"We're not prosecutors in the House of Representatives. We're not supposed to be doing that. They're supposed to be conducting an inquiry. And they showed their hand by saying that," he said.

Lawmakers described a chaotic scene and Democrats said the move compromised national security because some of the two dozen GOP House members took electronic devices into the secure room.

"This is just a hatchet job against the president and they need to get it out in public for everybody to see," he told Smith.

Smith asked Byrne what Republicans had hoped to achieve by essentially staging a sit-in during the deposition with Laura Cooper, a senior Defense Department official who oversees Ukraine policy.

Byrne said that he wanted future impeachment inquiry testimony "all out in the open."

However, Schiff says closed-door hearings are necessary to prevent witnesses from concealing the truth and has promised to release the transcripts when it will not affect the investigation.

"The president's allies in Congress are trying to make it even more difficult for these witnesses to cooperate," Schiff said.

House Democrats -- notably -- were unhappy with the move.

"The Republican's colleagues evidently have freaked out. It's really a pathetic show on their part," said Maryland Rep. Jamie Raskin.

"It's a pathetic stunt. All of this is going to be forgotten," exclaimed New Jersey Rep. Tom Malinowski.

Byrne responded that Republicans would continue to push Democrats until they opened the investigation to the public: "The pathetic stunt is what Adam Schiff and Democrats are doing in that room, and the rest of us have had enough. We're not going to let them continue to play that game."