Biden snaps at reporter over question about Putin: 'You're in the wrong business'

President Biden doesn't take kindly to a question at the end of his press conference in Geneva about the results of his summit with Russian President Vladimir Putin.

President Biden's ascent to the Oval Office meant the White House-media relationship notably improved over the prior administration, but Biden still had several testy moments with the press corps during his first year in office.

In January, shortly after taking office, Biden was irked at The Associated Press' Zeke Miller when he asked if pushing for 100 million vaccinations in his first 100 days was too low a goal.

"When I announced it, you all said it's not possible. Come on, give me a break, man," Biden said, walking away. In reality, the 100-million goal was easily achieved, and the country dispensed 200 million shots before his 100th day in office as vaccinations ramped up following a slow start.

In June, Biden lashed out at CNN's Kaitlan Collins after she suggested he was confident Russian President Vladimir Putin may change his malign behavior after their summit in Geneva.

Biden, who was walking away from his press conference, whirled around at Collins and said, "I'm not confident he'll change his behavior. What in the hell, what do you do all the time?"

As Collins tried to speak, Biden stuck up a finger and went on angrily, "When did I say I was confident? Let's get this straight. I said what will change their behavior is if the rest of the world reacts to them and diminishes their standing in the world. I'm not confident of anything. I'm just stating a fact."

He added Collins was in the "wrong business" if she couldn't understand why their meeting was productive before walking away. Biden later apologized for his outburst, saying he'd been a "wise guy."

BIDEN SNAPS AT REPORTER OVER PUTIN QUESTION: ‘YOU’RE IN THE WRONG BUSINESS'

In July, while sitting in the Oval Office with Iraqi Prime Minister Mustafa Al-Kadhimi, Biden smiled but still insulted NBC's Kelly O'Donnell after she asked him to comment on Veterans Affairs Secretary Denis McDonough's announcement that front-line VA workers would be required to get a coronavirus vaccine.

This was the same president who joked about running over a journalist who asked about Israel in May, as he took questions while test-driving a Ford F-150 Lightning.

Also in July, he grew heated with Fox News reporter Peter Doocy after being challenged about his remarks in May that vaccinated persons no longer needed to wear masks. At the time, a surge in the virus caused federal health officials to give updated mask-wearing guidelines, even for those who had received coronavirus vaccines.

"In May you made it seem like the vaccine was the ticket to losing the mask forever," Doocy said to Biden, who had already left the podium.

"That was true at the time," Biden shouted. "Because I thought there were people that were going to understand that getting vaccinated made a dramatic difference and what happened was the new variant came along, they didn’t get vaccinated, it spread more rapidly, and more people were getting sick."

Questions around Afghanistan created another memorable moment in July, when Biden interrupted reporters attempting to ask him about the troop drawdown, declaring that he didn't want to answer any more on the topic because it was a "holiday weekend."

After receiving questions on the nation's security issues and the withdrawal timeline, Biden said he wanted to talk about "happy things" ahead of the 4th of July.

"I'm not going to answer any more … Look, it's the Fourth of July," Biden said after a fourth query about Afghanistan. "I'm concerned that you guys are asking me questions that I'll answer next week. But this is a holiday weekend, I'm going to celebrate it. There's great things happening."

In late August, Biden memorably clashed with Doocy again while being pressed on the tumultuous U.S. troop withdrawal he ordered from Afghanistan. The war-torn country's fragile government quickly collapsed to the Taliban, and 13 U.S. troops were killed along with dozens of Afghans in a Kabul suicide bombing. 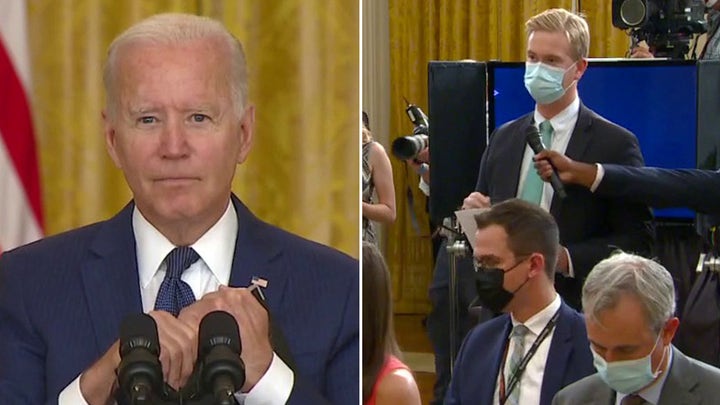 Biden said he took responsibility but repeatedly asked Doocy if it was accurate that former President Trump had also made a commitment to the Taliban on an Afghanistan withdrawal before leaving office. As Doocy continued to question him, Biden bowed his head and put it on his hands.

Biden repeatedly refused to take questions that month on Afghanistan, at one point blowing off a reporter at Federal Emergency Management Agency headquarters in Washington when she broached the subject. 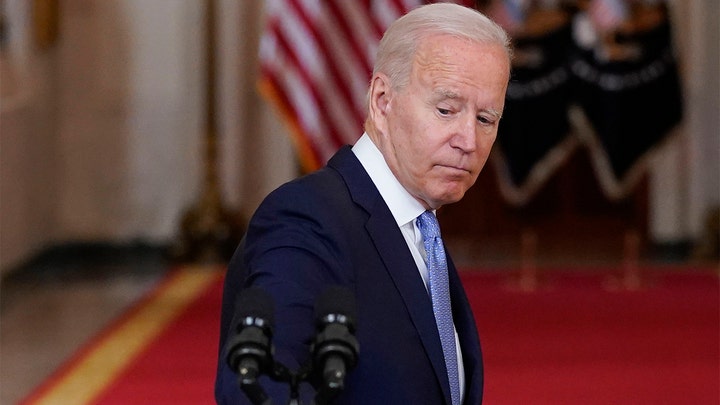 Biden has preferred a scripted approach to his question-and-answer sessions since taking office, wanting reporters to stay on his topic of the day. That was apparent yet again last week when, after he spoke on the surge of the omicron variant of coronavirus, reporters grilled him on Build Back Better's setback after Sen. Joe Manchin, D-W. Va., declared his opposition to the massive social policy bill.

"I'm not supposed to be having this press conference," Biden finally offered.

As Biden has learned, he's not going to be asked about ice cream every day.