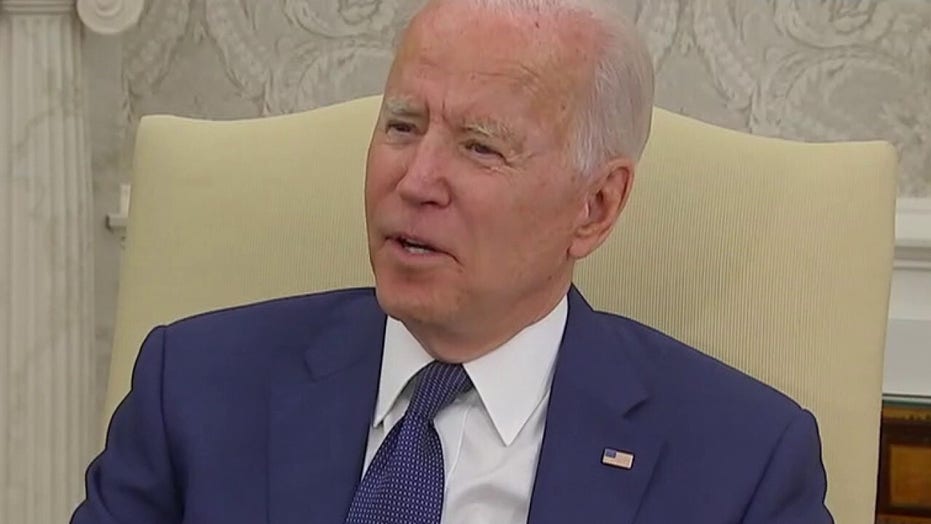 Biden to reporter asking about VA coronavirus vaccines: 'You are such a pain in the neck'

President Biden needles a reporter in the Oval Office for not sticking to his preferred topic of Iraq.

President Biden called a reporter a "pain in the neck" Monday in the Oval Office for asking him a question that was off his preferred topic of Iraq.

Sitting in the Oval Office with Iraqi Prime Minister Mustafa Al-Kadhimi, Biden smiled as NBC's Kelly O'Donnell asked him to comment on Veterans Affairs Secretary Denis McDonough's announcement that front-line VA workers would be required to get a coronavirus vaccine.

MAINSTREAM MEDIA CONTINUES TO FAIL US CITIES AMID CRIME SURGE: ‘THEY REFUSE TO CALL OUT THE LIBERAL MAYORS’

O'Donnell said she took his comments as a "compliment" as Biden chuckled. Biden announced the end of the U.S. combat mission in Iraq on Monday.

Biden was genial with O'Donnell, but he has lashed out in the past at reporters over questions he finds unfair or unfounded. Last month, he snapped at CNN's Kaitlan Collins for a question about Russian President Vladimir Putin, telling her she was in the "wrong business" at one point, and he also had sharp replies on the subject of his son Hunter Biden throughout 2020.

Biden has at times been criticized since he took office for being too scripted and expecting questions to be on his topic of choice. He's lately been more loose with his words, such as when he had to walk back remarks to reporters that Facebook was "killing people" because it allowed the publication of misleading information about coronavirus vaccines.

One White House reporter anonymously told journalist Julia Ioffe earlier this month that Democrats generally expect the media to take their side and are more "thin-skinned" than Republicans as a result.

"This is not unique to Trump but Republicans never expect a fair shake, so if you cover them fairly, you can have a good working relationship with them," the reporter said. "Democrats de facto expect you to be on their side and are horrified when you hold them to account as you would any other administration."