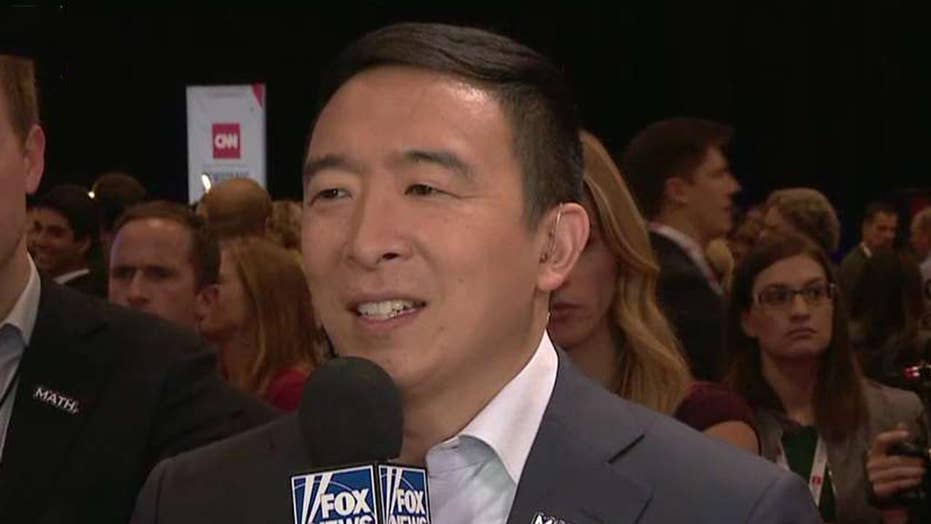 According to Edward-Isaac Dovere, a staff writer at The Atlantic, Yang indicated the network's moderators were hypocritical for not calling on him as often as other candidates.

According to a New York Times analysis, Yang spoke for less time (6 minutes, 48 seconds) than any other candidate on the stage. By contrast, the majority of candidates spoke for more than 10 minutes. Only Yang, Rep. Tulsi Gabbard, D-Hawaii, and billionaire Tom Steyer spoke for fewer than 10 minutes.

By Thursday afternoon, a hashtag trended on Twitter: #MSNBCFearsYang. MSNBC did not immediately respond to Fox News' request for comment.

Last week, the liberal network came under scrutiny when it left Yang off a polling graphic before the debate.

The graphic sparked a major outcry from Yang's supporters and #YangMediaBlackout was trending on Twitter.

MSNBC offered an apology to Yang on Sunday, claiming it "inadvertently" left him off the graphic and shared a graphic that included him as well as the several candidates who had polled at zero percent.

The Yang campaign didn't seem to welcome the apology. "Thank you @MSNBC, for making this apology for the 15th time. The #YangGang is very excited for #16," Yang campaign manager Zach Graumann reacted.