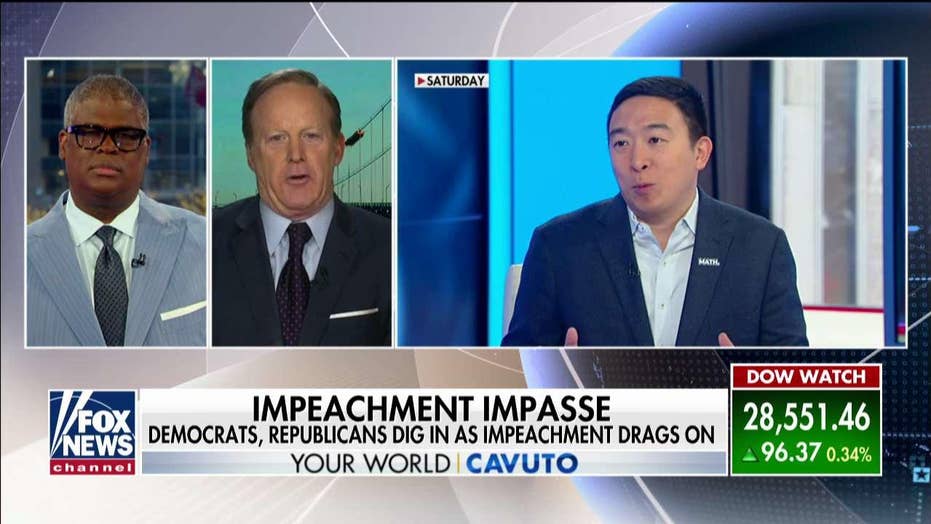 Sean Spicer: Yang struggling in 2020 Dem field because he's being 'pragmatic', not impeachment-minded

Prior to his appearance on MSNBC's "All In with Chris Hayes," Yang tweeted that his message is too important for him not to try and reach as many voters as he can.

"I am sitting down for a remote interview with Chris Hayes from South Carolina tonight," he said, referring to the MSNBC host.

"Chris, and other MSNBC journalists, have reached out to me and the team in the past days. I decided that I’d prefer to speak to as many Americans as possible -- our message is too important."

MSNBC faced backlash last month both from Twitter users and Yang himself after the network omitted him from prominent parts of its 2020 coverage. Yang specifically demanded an on-air apology and #MSNBCFearsYang trended on Twitter.

"I appreciate everyone's support," Yang said Friday. "You all are the best. Let’s get our message out to as many people as possible and shock the world in 38 days."

The businessman and his supporters previously attacked MSNBC, noting the relatively low amount of speaking time he had in comparison to other candidates at November's Democratic primary debate, co-moderated by MSNBC and The Washington Post.

According to a New York Times analysis, Yang spoke for less time (6 minutes, 48 seconds) than any other candidate on the stage. The majority of candidates spoke for more than 10 minutes. Only Yang, Rep. Tulsi Gabbard, D-Hawaii, and billionaire Tom Steyer spoke for fewer than 10 minutes.

Prior to that debate, the network excluded Yang from a graphic on polling and one previewing the debate.

The network attempted to apologize on Sunday but was mocked by Yang's campaign manager. "Thank you @MSNBC, for making this apology for the 15th time. The #YangGang is very excited for #16," campaign manager Zach Graumann said.