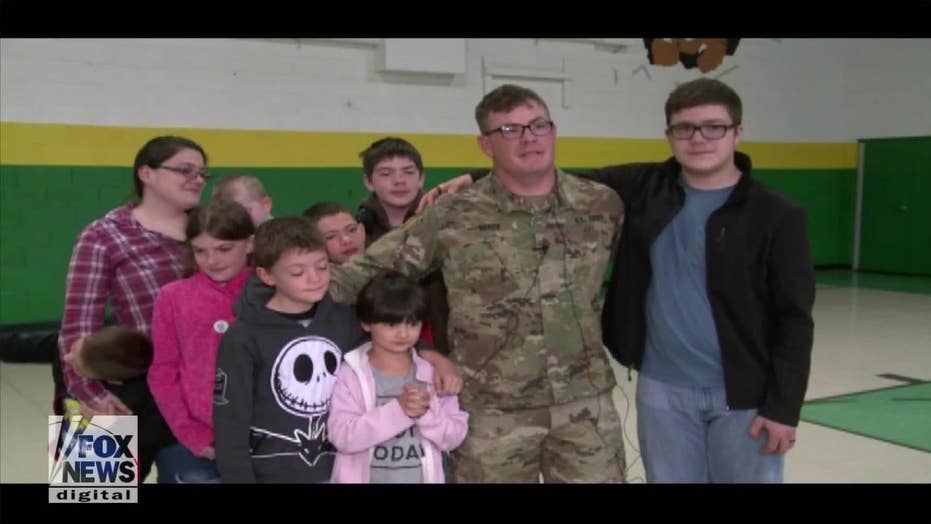 Soldier surprises his kids at school with early homecoming

A soldier surprised his kids at their school with an early homecoming when he posed as the school’s mascot during an assembly.

A soldier turned this elementary school’s assembly into a heartwarming reunion on Monday.

Justin Bunch wasn’t coming home to Tennessee until June — or at least that’s what he told his eight children.

"Keeping this from the kids was really hard," Justin’s wife, Kasey, said to WBIR. "I was shaking because I knew that they were going to be so excited because they thought he wasn't coming in until June."

Justin, who had been away for nine months serving in the Army, decided to hatch a plan with his wife Kasey to surprise his tight-knit brood.

Kasey went to Bay Ridge Elementary school, where several of her children attend school, and asked principal Kim Turner how the pair could pull off a surprise homecoming.

The two settled on Justin dressing up as the school’s mascot: Twister the Tiger during a school assembly.

Once the students were in the gymnasium, Turner began calling up Bunch’s kids — who each gave Twister high fives as they filed next to him.

Soon after his children were standing next to him, Justin took a step forward and removed the tiger head.

"When I saw him take the hat off, I went 'Oh my God' and I just ran. I wasn't thinking; I was just running," Bunch's son, Chad, said to WBIR.

His older kids, who were standing off camera, also ran up once they realized who was in the tiger costume.

Teacher, faculty, students and parents at the gymnasium all began cheering and crying.

"There wasn't a dry eye in the room. I was expecting it and I was trying to prepare myself for it but it was very special. I was happy to be a part of it," Turner said.

Justin and Kasey both seemed pleased with how it turned out.

"These are my kids. This is my family so it means a lot," Bunch said, WBIR reported.