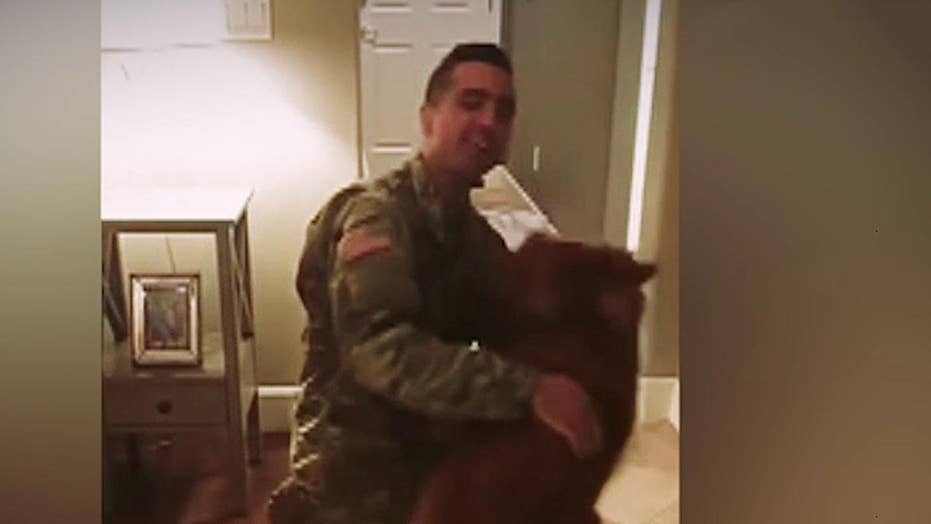 Private 1st Class Kevin went home for a visit after nine months of training at Fort Bragg to the delight of his dog Zephyr.

A California man surprised his dog when he was granted leave from the Army, and the pup’s adorable reaction has gone viral.

Private First Class Kevin returned home to Livermore for a visit after nine months of training at Fort Bragg. His family decided to surprise his Golden Retriever, Zephyr, with Kevin’s homecoming by doing a special What the Fluff Challenge, the Internet trend that has pet owners hold up a blanket and then disappear, much to the animal’s confusion.

In a video of the encounter, Jacob can be seen holding a blanket up over the doorway while a patient Zephyr sits watching. But when the blanket drops, Kevin is standing there, instead.

When the dog sees her owner, she goes nuts. Zephyr runs up to Kevin excitedly, spinning in circles with her tail wagging as he gives her lots of rubs.

“We arrived home from the San Francisco Airport at 1:00 a.m. While we were all very excited and emotional to have him home, no one was more happy than our four-year-old Golden Retriever, Zephyr, and none of us anticipated Z's reaction,” Lord said.