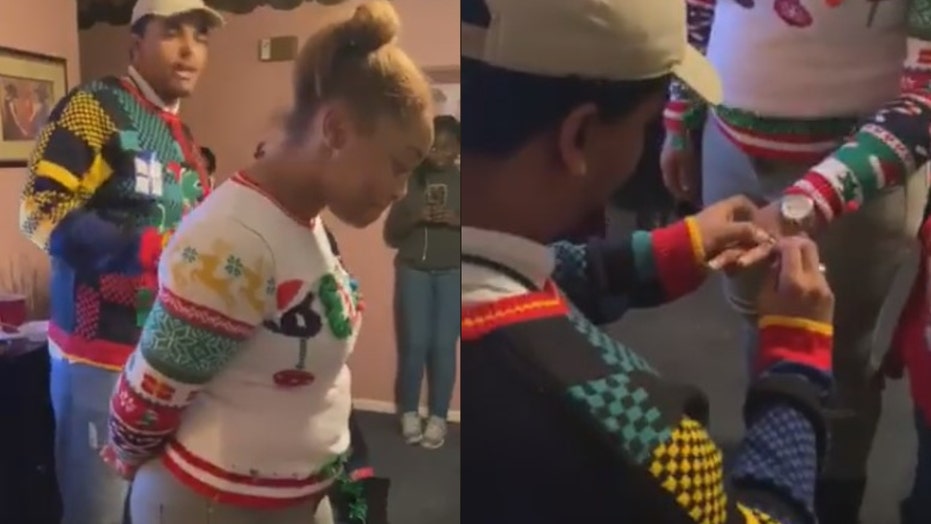 Survey says: Will you marry me?

A North Carolina man’s now-viral proposal to his girlfriend took a page from the popular TV game show “Family Feud.”

In a Facebook video posted on Monday, the man, identified by Fox 8 as Joshua Bell, asked his girlfriend Kiana Myrick a series of marriage-themed questions in Family Feud format.

“We surveyed a hundred women,” Bell said, standing behind Myrick as she prepared to play what she thought was just a normal game with the family.

“Name a day a woman always dreams of,” he said, to which Myrick quickly answered: “Her wedding day!”

Bell continued down his rapid-fire questions, all relating to weddings such as “name something a woman wears all white to.”

Suddenly, the family game night took a turn as Bell asked, “How would you finish this: Will you marry me?”

WOMAN SLAMMED FOR COMPLAINING ABOUT ENGAGEMENT RING SIZE, TOLD HER FINGER IS THE PROBLEM

Myrick, apparently a bit confused, slightly turned around to look back at him.

“Yes, I will?” she said skeptically.

Bell then followed up with “you might as well make it official, right,” before getting on one knee to officially pop the question.

Myrick’s jaw drops and is visibly shocked by the surprise proposal as her family gleefully celebrates.

“I love you with all of my heart,” Bell said, as Myrick wipes away tears of joy. “A lot of people may say we are young, but I say life is too short.

“Through everything we’ve been through, baby, we managed to keep God first. And now eight years later, we’re here –I’m looking for 88 more,” he added. “Will you marry me?”

The video, which has garnered 2.4K comments on Facebook, raked up 1.6 million views by Friday morning.

Oh, and in case you were wondering, she said yes.