The Duchess of Sussex has again “recycled” a favorite frock, sporting the emerald green dress she wore for the photocall and joint interview announcing her engagement to Prince Harry to the WellChild Awards in on Wednesday night.

Duchess Meghan was all smiles when she arrived at the London event, stepping out in the elegant, sleeveless, knee-length dress by brand P.A.R.O.S.H., Page Six reports. She completed the look with a camel Sentaler trench, neutral suede heels and a tortoiseshell handbag.

Britain's Prince Harry and Meghan, the Duke and Duchess of Sussex arrive to attend the WellChild Awards Ceremony in London. (AP Photo/Kirsty Wigglesworth)

Eagle-eyed style watchers may remember the dress from her November 2017 engagement announcement, and the coat from her first Christmas church service with the royal family at Sandringham that same year.

The fashion moment is hardly the first time that the 38-year-old royal has worn the same clothing for multiple, photographed public appearances. While recently abroad in South Africa for a formal 10-day tour, the duchess seemed to make a point of mixing old outfits with affordable styles during the highly publicized excursion.

The WellChild Awards celebrate the inspiring qualities of some of the country's seriously ill young people. (AP Photo/Kirsty Wigglesworth)

For example, a source told Hello! that the former actress’ decision to go without her glittering engagement ring during the tour was a “powerful signal” of her desire to be “low key” while doing meet-and-greets with the public.

"The very fact Meghan was adroit enough to realize that and quietly left her rock elsewhere, I think, is a powerful signal," royal expert and writer Daniela Elser explained in an article for News.com.au.

"Firstly, of just how conscious she is about making others comfortable, secondly, that she is sensationally savvy image-wise and third, that she is more than happy to rewrite the rule book,” Elser said.

Britain's Prince Harry and Duchess of Sussex, left, react as they are given bracelets by Lyla-Rose O'Donovan and her father Paul, during the annual WellChild Awards in London, Tuesday Oct. 15, 2019. (Toby Melville/Pool via AP)

At the WellChild Awards, Prince Harry became visibly overcome with emotion while giving a speech at the event honoring sick children and their caregivers.

The sixth in line to the British throne has been a patron of the event since 2007, but this is the first year he attended as a parent himself, after welcoming son Archie Harrison in May.

“Last year when my wife and I attended we knew we were expecting our first child -- no one else did at the time, but we did -- and I remember squeezing Meghan’s hand so tight during the awards..." he said before having to pause to collect himself. 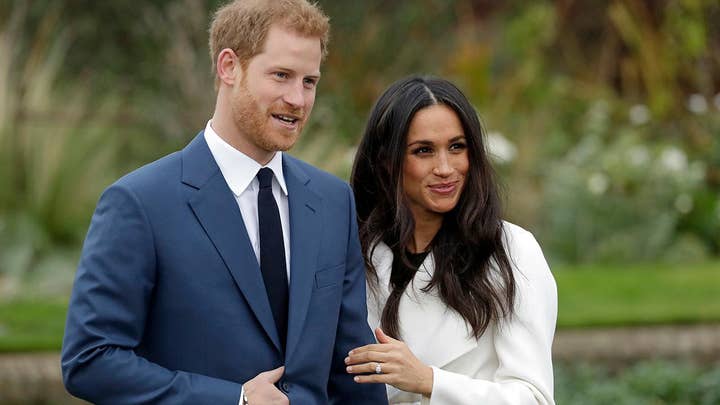 "And now, as parents, being here and speaking to all of you pulls at my heartstrings in a way I could have never understood until I had a child of my own," he added.

WellChild is a charity that supports children who are battling serious illnesses and their families who care for them.