They say diamonds are a girl’s best friend — and Duchess Meghan evidently agrees.

After making her post-baby debut at the Trooping of the Colour parade two weeks ago, eagle-eyed style watchers fawned over the royal’s new eternity band – failing to catch a glittering update to her engagement ring.

In recent days, fans began buzzing about an apparent upgrade to Duchess Meghan’s three-stone sparker, the band of which appears to have been updated with pavé diamonds, replacing the plain yellow gold band, Glamour reports.

Prince Harry, Duke of Sussex and Meghan, Duchess of Sussex ride by carriage down the Mall during Trooping The Colour, the Queen's annual birthday parade, on June 08, 2019 in London, England. (Photo by Samir Hussein/Samir Hussein/WireImage)

It remains unclear when the ring was updated, or what prompted the redesign of the yellow gold band, which Prince Harry previously described as his wife’s “favorite” metal.

Speaking to the media following their November 2017 engagement, the prince revealed that he personally designed the three-stone ring for his then-fiancée, which features a center diamond from Botswana flanked by two smaller gems from Princess Diana’s personal collection on each side.

"The ring is — is obviously yellow gold because that's... [Meghan’s] favorite and the main stone itself I sourced from Botswana and the little diamonds either side are from my mother's jewelry collection to make sure that she's with us on this — on this crazy journey together,” Prince Harry said at the time.

His bride-to-be echoed similar sentiments of the “perfect” piece of jewelry. 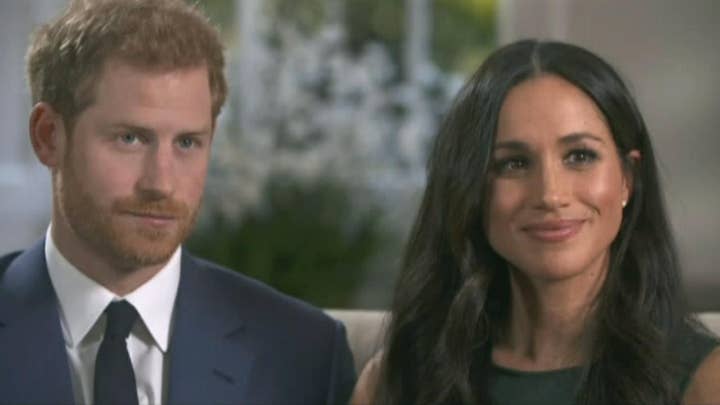 "I think everything about Harry's thoughtfulness and the inclusion of [Diana's stones] and, obviously, not being able to meet his mom… it's so important to me to know that she's a part of this with us," Duchess Meghan said at the time of her special ring, Glamour reports.

"It's incredibly special to be able to have this, which sort of links [where Harry is] from and Botswana, which is important to us. It's perfect,” she added.