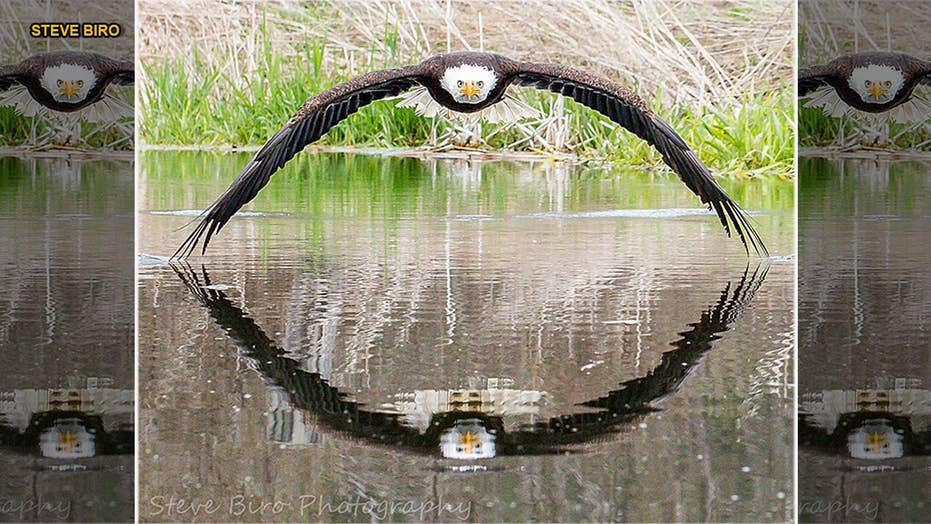 An incredible photo of a bald eagle is taking the internet by storm. The remarkable photo was captured by amateur photographer Steve Biro at the Canadian Raptor Conservancy in Norfolk County, Ontario. In the photo the bird's wingtip feathers gently touch the water as it looks intently ahead, while its reflection can be seen in the water below. The bald eagle, known as Bruce, is now something of a social media star.

A tourist in Scotland spotted a golden eagle — a protected species in the U.K. — flying with what appears to be a trap on its leg.

The bird was seen flying in the Scottish council area of Aberdeenshire, the Independent reported, adding the Royal Society for the Protection of Birds (RSPB) and local police have launched an investigation into the matter.

A golden eagle was recently spotted flying with a trap on its leg. (SWNS)

“This picture of a golden eagle with a trap on its leg is sickening. There is no way a bird of prey could become caught in a legally set trap and as such, it is absolutely clear [that] this incident is a result of criminality,” Ian Thomson, the head of investigations for RSPB-Scotland, said in a statement to the publication.

“There have been a number of incidences where birds of prey have been caught in similar traps resulting in fatalities and we are concerned for the fate of this bird if it is not caught soon so it can receive veterinary treatment. We urge the public to report any sightings to the police."

An up-close photo of the apparent trap. (SWNS)

The golden eagle is “the top predator in the Scottish countryside,” notes The Wildlife Trusts. The raptor — which is the national bird of Germany, Mexico, and Afghanistan — “disappeared” from England and Wales in the 19th century due to “severe persecution,” according to the trusts.

The bird is protected under the Wildlife and Countryside Act of 1981, per the UK-based news service SWNS.