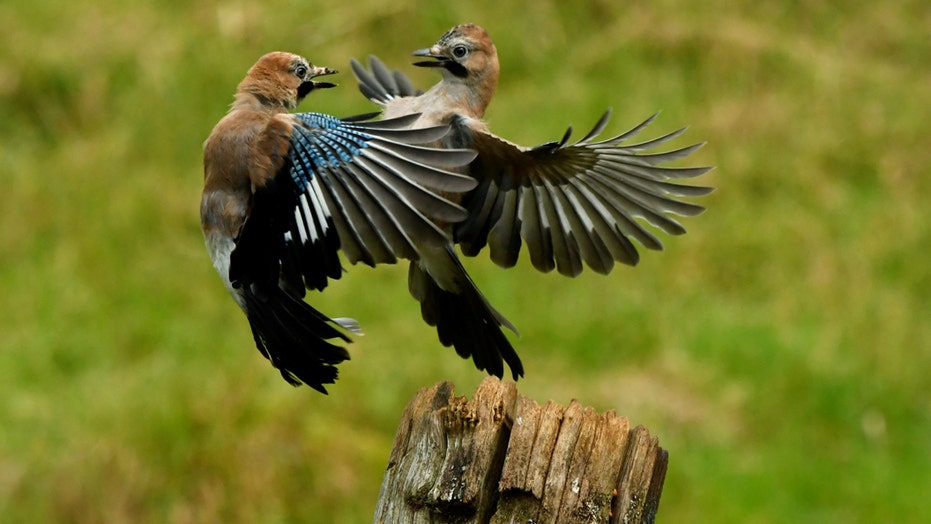 This gives new meaning to the phrase, "This one's for the birds."

An amateur photographer from Scotland has captured incredible pictures of two jaybirds fighting over food.

Phil Clark, a 40-year-old bus driver from Inverness, said he waited seven hours to capture the remarkable photos at a bird hide in Kirkcudbright, Dumfries and Galloway, SWNS reports.

Phil Clark, 40, snapped the colorful and noisy animals at a bird hide in Kirkcudbright, Dumfries and Galloway. (Credit: SWNS)

"You don't always see jays there because they are very intelligent and shy," Clark said of the pictures taken on Aug. 3. "To see two of them fighting for food was extremely uncommon. They are quite territorial. They are vocal and they shout once they see another bird coming."

Clark added that he thinks the squabble was one of the birds telling the other it should not go near its food.

Clark, a bus driver, from Inverness, Scottish Highlands, was at the lookout spot from 7 a.m. until 4 p.m., patiently waiting to photograph wildlife. (Credit: SWNS)

According to Animal Diversity, Eurasian jays (which reside in Western Europe, Northeast Africa and parts of Asia) have a diet that largely consists of acorns. It's also supplemented with fruit, grains and some insects.

"It was amazing to see them fighting," Clark said, noting he had seen the birds before but had not been able to snap an image. "To get an action shot of them fighting was just something else."