A British woman had a botched lip filler job when she went to a 'botox party;' she almost lost her top lip in the process.

From botched lip fillers to sepsis-ridden implants and even death, here's a look at some of 2018's most severe complications in the world of cosmetic surgery.

1. Woman had left breast removed after contracting sepsis in implant

Nikki Belza, 35, said she first woke up with tenderness in her left breast in 2016, but chalked it up to a pulled muscle. She later collapsed at work and a blood test revealed she was in septic shock. Belza claims she was told that if she didn’t remove her left breast, she had a 50 percent chance of dying from sepsis. She said she was eventually diagnosed with a strep infection in her left breast pocket which had spread to her blood. She lived for four months with one breast and underwent her fourth reconstructive surgery to repair nerve damage and scar tissue on Dec. 5. 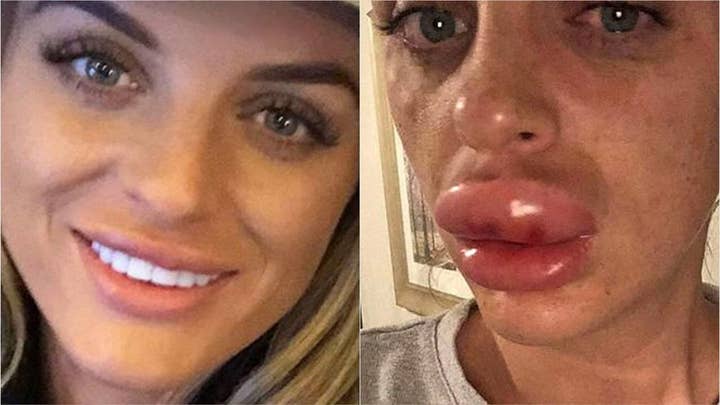 When Rachael Knappier went to a "Botox party" at a friend's home at the end of August, she planned to indulge in a shot of the wrinkle eraser in her forehead and a glass of Prosecco with friends. But after a while, she agreed to have lip fillers, and within hours began feeling like something had gone wrong. The beautician had injected the filler into an artery, which caused her lips to swell massively. She went to the local emergency room who told her to go back to the beautician and tell her to dissolve the fillers. Due to the pain in her lips and the severity of the pressure, she contacted a local aesthetic nurse who injected her with antihistamine medication to attempt to reduce the swelling and pressure. Three months later her lips are nearly back to normal.

While this case didn't happen on an operating table or in a clinic, it would be hard to believe it from the photos. Bradley Reeson, 23, feared he was going blind after his head doubled in size when he had an allergic reaction to red hair dye that he bought while vacationing in Egypt. The swelling spread to his neck and he was given a shot to prevent his throat from closing. He shared the photos to warn others about the dangers of a paraphenylenediamine allergy.

Beautician Louise Harvey, 36, booked the procedures after feeling self-conscious ever since the birth of her third child. But despite a family history of blood clots in her doctor's notes, she was allegedly sent home without any blood thinners. And a little over two weeks after her $14,000 operation, she collapsed at home, struggling to breathe. She died of a pulmonary embolism, leaving her mom to care for her three children.

5. US woman develops salmonella in breast implant after trip to Cancun

The 34-year-old patient, who was not named in the case report, had undergone breast augmentation surgery and was in good health five months before vacationing in Cancun. According to the report, she developed abdominal pain and diarrhea during her vacation, which later progressed to fever and chills that persisted upon her return. Her symptoms resolved without treatment, but 14 days later she began experiencing pain in her right breast, which appeared swollen and tender. A "small amount of homogeneous fluid” was observed surrounding her right implant during an ultrasound. She was prescribed antibiotics but the pain continued to worsen, leading doctors to operate. An abscess was incised, drained and the implant removed, with cultures growing Salmonella serogroup C. The patient was placed on antibiotics and advised to wait four months to replace the implant, and is believed to be the first documented case of breast implant infection following a case of traveler’s diarrhea.

Laura Avila traveled to a Juarez, Mexico, clinic with her fiancé from their home in Texas in late October, intent on getting a nose job and breast augmentation. She suffered complications from the anesthesia, which caused severe swelling in her brain. Avila then had a heart attack and was placed in a medically induced coma to prevent further brain damage. Avila's fiance, Enrique Cruz, told "Inside Edition" that when he arrived at the Rino Center at 3:30 p.m. to pick her up from the 12 p.m. procedure, doctors claimed they were waiting for anesthesia to wear off. He maintains that hours passed before they finally called a local hospital for help.The 35-year-old died days after her family moved her to hospice.

Stephanie Lynn, 28, is getting married next year and wanted to get a skull and roses tattoo that she has on her left arm removed before the big day. But Lynn contends the shop botched the removal, and her hand swelled to four times its normal size. She claims she couldn't straighten her arm and was left with agonizing puss-filled blisters, prompting a trip to the hospital where she was given antibiotics to treat the infection. She said her arm has been left permanently scarred, and she may postpone her wedding.

Jessica Bennett, of the U.K., said she was desperate for help after her lips became swollen and hard following questionable filler injections. In a graphic video allegedly posted to Facebook, yellow pus could be seen leaking out of Bennett’s top lip. The video caught the attention of Dr. Tijion Esho, who regularly appears on E4’s "Body Fixers" show. In a video posted to his Instagram, he told followers that he had been in contact with Bennett and was safely removing the infected fillers.

A woman identified as only Jessica said she sought breast implants last summer as a birthday gift to herself. She did not identify her surgeon, or reveal where the operation took place, but claimed that the day after the operation her left breast had swelled to twice the size of her right breast, and the nipple was turning purple. After allegedly being dismissed by her surgeon, despite being able to smell an infection, her physician diagnosed her with MRSA, and she had to have both implants removed.