Chick-fil-A employee in Georgia leaps through a drive-thru window to save a little boy who was choking.

One Chick-fil-A employee in Georgia said he’s feeling like a “hero” after hopping through a drive-thru window to save a young boy from choking.

On Wednesday, Logan Simmons was working the drive-thru of the chicken-centric chain’s Stonebridge Village location in Flowery Branch when he heard a woman in the drive-thru line scream that her son was being choked by the seat belt in her car, the WSB-TV reports.

Springing into action, the Hall County teenager leapt through the window and ran to the rescue.

Logan Simmons was recently working the drive-thru of Chick-fil-A's Stonebridge Village location in Flowery Branch, pictured, when he rushed to save a young customer from choking.  (Google Maps)

NICKI MINAJ GETS IN TWITTER SPAT WITH WENDY'S OVER SPICY NUGGETS

With the 6-year-old’s seat belt tangled around his neck, Simmons recalled that the youngster was “turning red and losing pigmentation in his face,” prompting him to pull out a handy pocketknife and safely cut the boy free.

“I’m still kind of shocked right now myself that all this has happened," Simmons later told WSB-TV.

Simmons’ incredible jump through the window was captured on surveillance camera, and has since been circulated online.

Soon after, the mother of the boy called the Chick-fil-A staffer to express her thanks for saving her son's life. 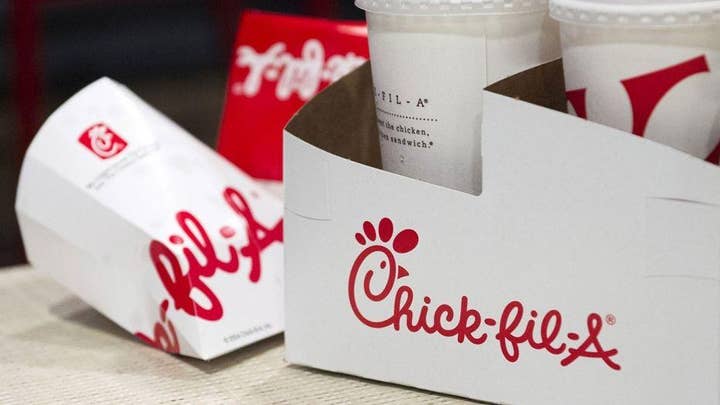 “I do feel like a hero," Simmons mused of the feat.

In similar headlines, last summer, a Texas Chick-fil-A worker was praised for saving a customer from choking on their food in the restaurant. Months before, a Colorado Chick-fil-A staffer was declared a hero for saving his choking co-worker with the Heimlich maneuver.