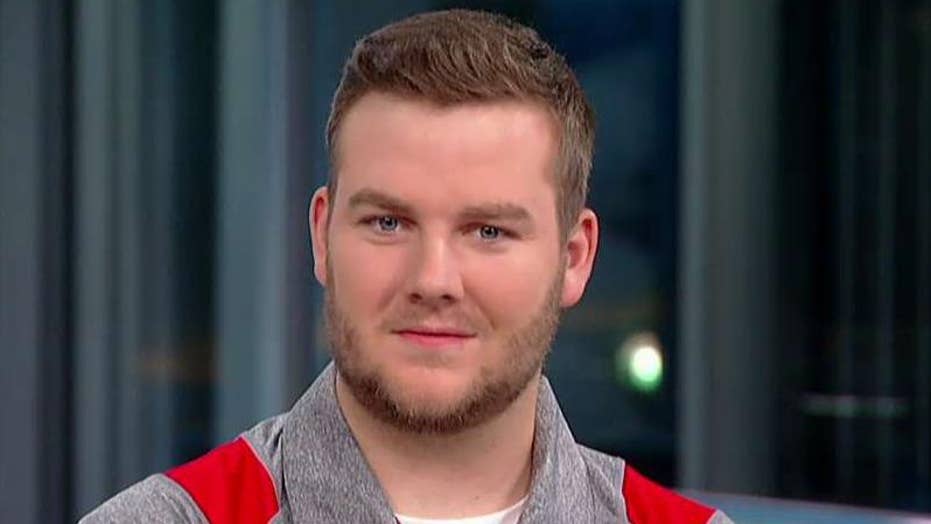 Carson King, the college football fan whose televised request for beer money resulted in a massive fundraiser for a children's hospital in Iowa, is now immortalized on cans of Busch Light.

King went viral when he appeared on television during ESPN's College Game Day for a Sept. 14 game between then-No. 19 Iowa Hawkeyes and the Iowa State Cyclones holding a sign that read, "Busch Light Supply Needs Replenished."

After a flood of donations to his cause, he decided to give the funds to the University of Iowa Stead Family Children's Hospital.

Anheuser-Busch and Venmo have offered to match the donations. Last week, King told "Fox & Friends" he had accumulated more than $800,000 for charity.

The beer giant also promised to send King a year's supply of Busch Light. To solidify King's status as an "Iowa legend," the company memorialized his face on the limited-edition cans.

"Hey @CarsonKing2, we said we’d send you a year’s worth of Busch Light, but first we had to make sure the cans were fit for a King. Let us know where to send the truck. #IowaLegend," Anheuser-Busch tweeted.

"Placing a person’s face directly onto our product is something we’ve never done before," Daniel Blake, a representative of Busch Light, told The Des Moines Register. "But we felt we needed to create something special just for Carson. We can’t wait to get these new cans over to him so he won’t have to worry about running out of his Busch Light supply anytime soon.”