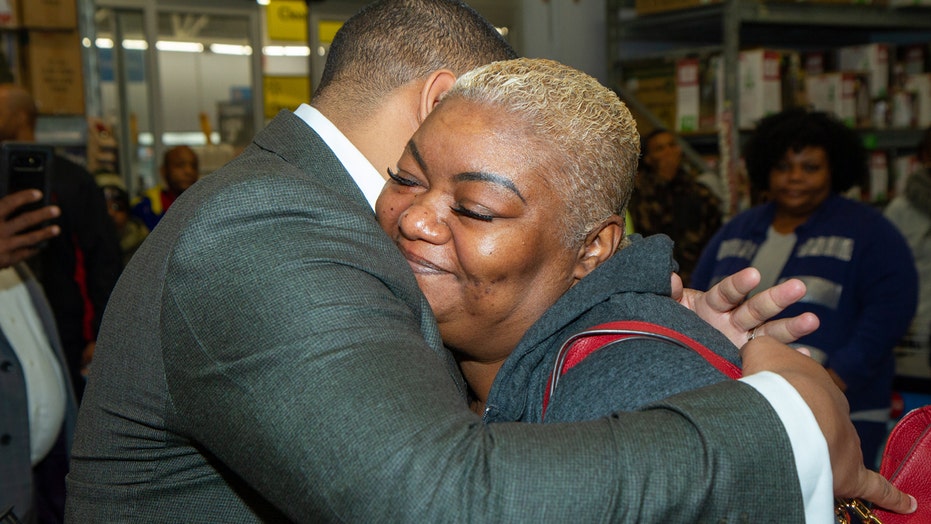 "We're blessed to be a blessing."

That's how an Atlanta pastor explained why his church decided to pay off $10,000 worth of layaway items in Walmart Monday.

Kevin Murriel, the senior pastor of Cascade United Methodist Church, made the announcement this week for 23 families who expressed gratitude, some left speechless by the generous gesture.

Suwanda McCreary hugs Cascade United Methodist Church senior pastor, Kevin Murriel, after his church paid for $10,000 worth of items in layaway at an Atlanta-area Walmart. McCreary's 28-year-old son died in April and he left three kids behind. She said it meant a lot to her. (Douglas Simmons/Dream Images Productions)

For Suwanda McCreary, it was the extra boost she needed this year. Her 28-year-old son, with whom she would go shopping every year, died in April, leaving behind three kids.

COMMUNITY RAISES $35G FOR WALMART CASHIER WHO PAID FOR WOMAN'S BILL: 'LORD TOLD ME I HAD TO HELP HER'

"It's a big help. It's a tremendous help," McCreary told WSBTV through tears. "Because I really wasn't able to do it."

"Everyone deserves a good Christmas," Murriel told the families gathered. "Merry Christmas and we hope that you are blessed by this gift."

The local pastor said they are not asking for anything but just that they would "pay it forward" at some point in their lives.

He pointed out a young girl named Promise who was with her mother.

"This is our future," Murriel said. "And we want to make sure that the future is bright for Promise and those young people, children, that we have an immense responsibility to care for."