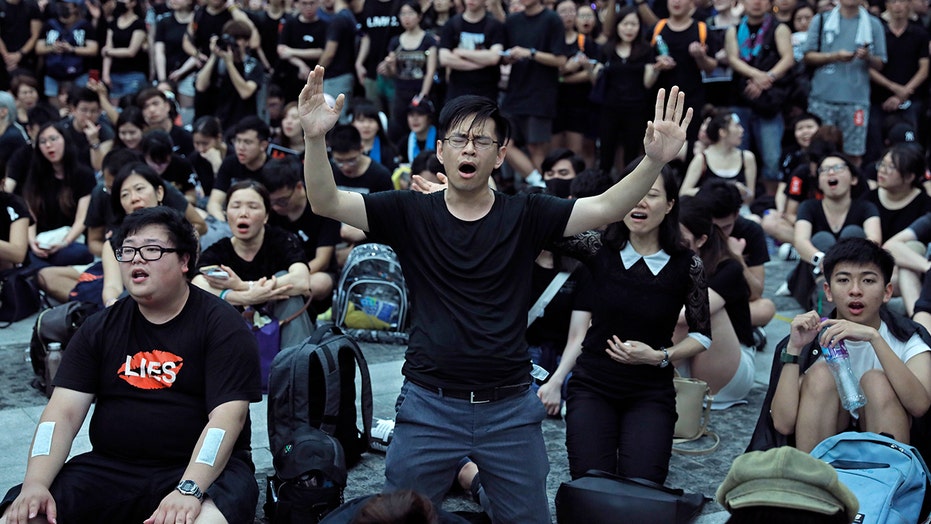 A suspension of the controversial China extradition bill and an apology doesn't stop protesters in Hong Kong; Benjamin Hall reports.

A hymn sung by Christian groups participating in the anti-extradition Hong Kong protests has caught on and become an unlikely anthem for the movement of millions in the streets.

For the past week, "Sing Hallelujah to the Lord" has been heard almost non-stop at the main protest site in front of the city's Legislative Council, and at marches and tense stand-offs with police, Reuters reported.

Although only 10 percent of the population is Christian, church groups quickly rallied after being alarmed by reports of police brutality to make a safe haven for protesters as the government said it had to crack down on "organized riots."

And that's how the hymn caught on.

“As religious assemblies were exempt, it could protect the protesters. It also shows that it is a peaceful protest,” Edwin Chow, 19, acting president of the Hong Kong Federation of Catholic Students, told Reuters. “This was the one people picked up, as it is easy for people to follow, with a simple message and easy melody."

The simple hymn heard around Hong Kong was composed by Linda Stassen-Benjamin in the United States in 1974 for Easter.

The protests over the past 10 days have been largely peaceful although police on Wednesday last week used tear gas and rubber bullets to disperse crowds.

“Stop Using Baton Or We Sing ‘Hallelujah to the Lord’,” read one protest placard after the rubber bullets were fired.

Protesters say the religious song has helped diffuse tension with the police.

“It has a calming effect,” said Timothy Lam, 58, a Catholic priest at Grace Church Hong Kong, who has attended the protest with other churchmen to promote peace. “The police had a lot of equipment, they were very tense and searching people. The students sang this to show they were peaceful."

Hong Kong's Beijing-backed government leader, Carrie Lam, who is Catholic herself, apologized in face of the opposition, postponing the introduction of the extradition bill. Some protesters hoped the Christian anthem would help sway her.

“She is Catholic after all, it’s one of the main reason we sing it,” said Jamie, an 18-year old student who is not Catholic.

Critics say the extradition bill would undermine Hong Kong's independent judiciary and rule of law, guaranteed by a "one country, two systems," formula under the former British colony returned to Chinese rule in 1997.

In a country known for persecuting Christians and other religious minorities, Hong Kong is known for having a high degree of religious freedom, unlike mainland China.

Members of the Chinese Communist Party are prohibited from having any religious faith, and party members who break the rule can be expelled.

A reporter for Hong Kong Free Press, Jennifer Creery, tweeted that she will never get "Sing Hallelujah to the Lord" out of her head.