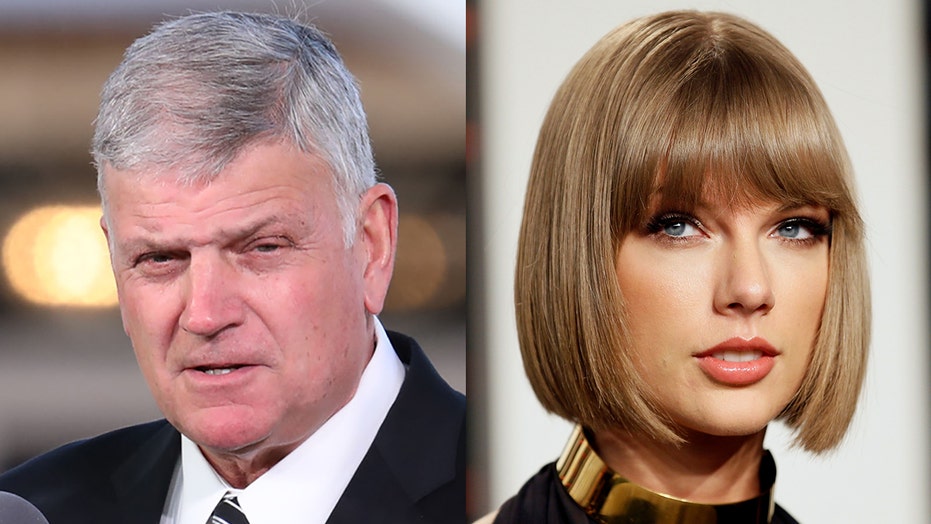 If he was in the audience Monday, Franklin Graham may have pulled a Kanye.

The Evangelist instead took to his Facebook page to slam pop singer Taylor Swift for promoting the "socialist left's so-called Equality Act" during a politically charged 2019 MTV Video Music Awards -- which also posted its lowest ratings ever.

"Shame on Taylor Swift for using her platform to try to push the socialist left’s so-called Equality Act, which has nothing to do with equality, but is about pushing the LGBTQ agenda down the throats of the American people," the son of the late Billy Graham wrote on Facebook Tuesday night.

‘OVERCOMER’ ACTOR LEFT HOLLYWOOD MOVIE WHEN ASKED TO DO NUDITY: 'I HAD TO CHOOSE CAREER OR CHRIST'

The "ME!" singer, who recently went from being famously apolitical to an overnight liberal activist, promoted her new album "Lover" with a performance of the hit song and opened the night with a colorful rendition of "You Need to Calm Down," an LGBTQ anthem that mocks Christians as uneducated and homophobic, with big gold letters on the stage that read "Equality Act."

"This bill is the most crushing threat to religious liberty in our nation’s history," Graham wrote. "In addition to allowing perverted men access to women’s private spaces like dressing rooms and restrooms, and allowing biological males to take over girls’ and women's athletic competitions, this bill would do a lot more damage. It’s about trying to force those of us who don’t agree to accept and approve the LGBTQ lifestyle, and I’m not going to accept that."

After winning the top prize, Video of the Year for "You Need to Calm Down" -- and dropping an F-bomb -- Swift called on the White House to respond to the Change.org petition she launched in June and which has more than 500,000 signatures.

Then, the White House responded.

"The Trump Administration absolutely opposes discrimination of any kind and supports the equal treatment of all; however, the House-passed bill in its current form is filled with poison pills that threaten to undermine parental and conscience rights,” said the statement from a White House spokesperson.

Despite Swift's assertion, the White House is only required to respond to petitions filed on its internal petition website, not those on sites such as Change.org, where the petition cited during Swift's acceptance speech had been posted.

"This is far too serious for Christians to sit by and do nothing," Graham said. "I encourage everyone to contact their representatives in the Senate, asking them to vote AGAINST this dangerous measure which has already passed the House."