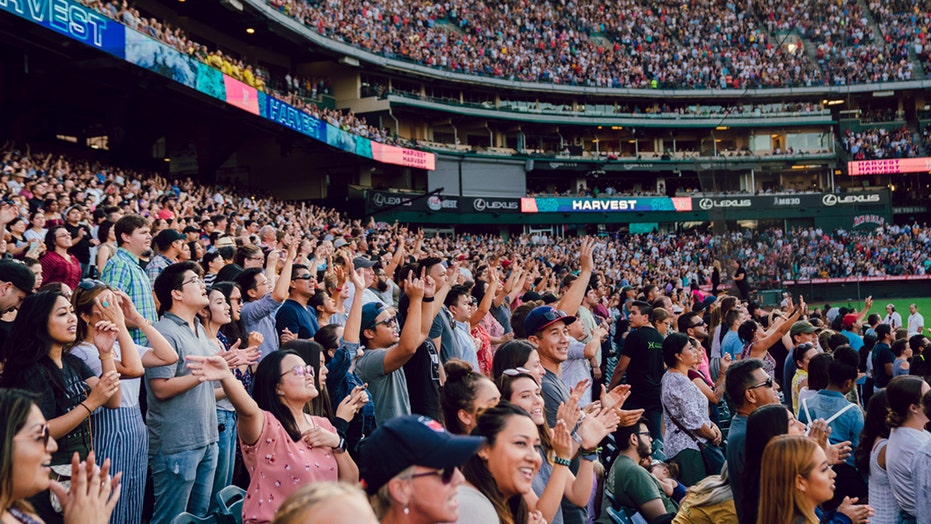 Thousands of people chose to give their lives to Jesus this weekend at an Anaheim, Calif. crusade in Angel Stadium that honored God and country.

At the conclusion of each night of the SoCal Harvest event held Aug. 23-25 that saw over 100,000 people attend, Pastor Greg Laurie delivered a message called "Happiness, hope, and heaven."

He shared the gospel, similar to what Evangelist Billy Graham, who called Laurie the "evangelist of the future," did for so many years.

Over 8,000 people made decisions to follow Jesus at SoCal Harvest 2019. (Harvest)

With fireworks in the evening sky, the baseball stadium's scoreboards lit up with the words: "Welcome to the family of God."

More than 8,000 people made the decision to follow Jesus, bringing the grand total to half a million since the first one held in 1990.

On the first night, followers held a military appreciation ceremony and unfurled a massive American flag across the outfield as Brennley Brown, a finalist on "The Voice," sang "God Bless America." Former Navy SEAL and actor Remi Adeleke offered an opening prayer.

Over 100,000 people attended the SoCal Harvest held in California over the weekend. (Harvest)

Throughout the crusade, attendees worshipped with Jeremy Camp, Chris Tomlin, Newsboys, Lecrae and Phil Wickham, to name a few.

The 30th annual SoCal Harvest Crusade was the kick-off event of Harvest's 2020 Vision to launch a "Jesus Revolution" through crusades in southern California and Boise, Idaho. The tour is to end with a crusade in 2021 at Los Angeles Stadium at Hollywood Park, currently under construction. The Harvest team has aimed to reach over 1 million people and see 100,000 professions of faith through the crusades.

“I keep doing these crusades year after year because I want to take as many people with me to Heaven as I possibly can,” Laurie said.