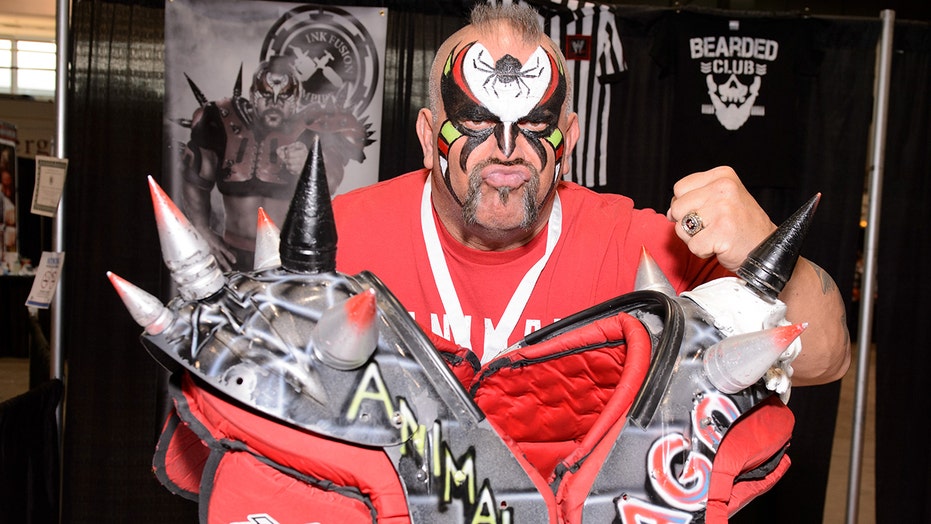 Joe Laurinaitis, better known by his wrestling persona Road Warrior Animal, has died. He was 60.

“At this time, we would like to confirm the passing of Joseph Laurinaitis aka Road Warrior Animal at the age of 60. The family is planning to release a statement later today. At this time we ask for you to keep everyone in your thoughts and prayers. #OhWhatARush,” the statement reads.

According to TMZ, police responded to a 911 call at the Tan-Tar-A Resort in Osage Beach, Mo. Tuesday. When officers arrived at 11:49 p.m. emergency personnel had already declared him dead.

NIKKI AND BRIE BELLA INTRODUCE THEIR NEWBORN SONS: 'WE'RE SO IN LOVE'

“WWE is saddened to learn that Joe Laurinaitis, known to WWE fans as Road Warrior Animal, has passed away,” the organization said in a statement. “WWE extends its condolences to Laurinaitis' family, friends and fans.”

“RIP Animal, love you my brother, I know you and Hawk have a lot of unfinished business to take care of! God speed and blessings to your beautiful family,one love4Life. HH,” he wrote.

DAVID ARQUETTE SAYS MAKING WRESTLING DOCUMENTARY WAS 'CATHARTIC': 'I LEARNED A LOT ABOUT MYSELF'

Road Warrior Animal was easily recognizable in professional wrestling thanks to his intimidating face paint and attire that was typically covered in metal spikes. He made up half of one of the most successful tag-teams in history with his partner Hawk (Michael Hegstrand) — the Road Warriors.

According to WWE, they presided over so many dominant matches that the phrase “Road Warrior pop” is still used behind the scenes today to describe, “particularly deafening reactions from the crowd.”

The organization notes that Laurinaitis was born and raised in Chicago before moving to Minneapolis to train with Hawk under Eddie Sharkey. They soon joined manager “Precious” Paul Ellering and made waves on the pro-wrestling circuit for many years before joining the WWE in 1990, where they were known as The Legion of Doom. They won the World Tag Team Titles in 1991 and 1997. After Hawk’s death in 2003, Laurinaitis won the title once more in 2005, teaming with Jon Heidenreich.

According to TheWrap, Joe is the brother of John Laurinaitis, a retired pro wrestler and producer who used to perform under the name Johnny Ace. John is also married to the mother of the Bella Twins, Nikki and Brie. Joe’s other brother, Marcus, also competed in professional wrestling under the name The Terminator.